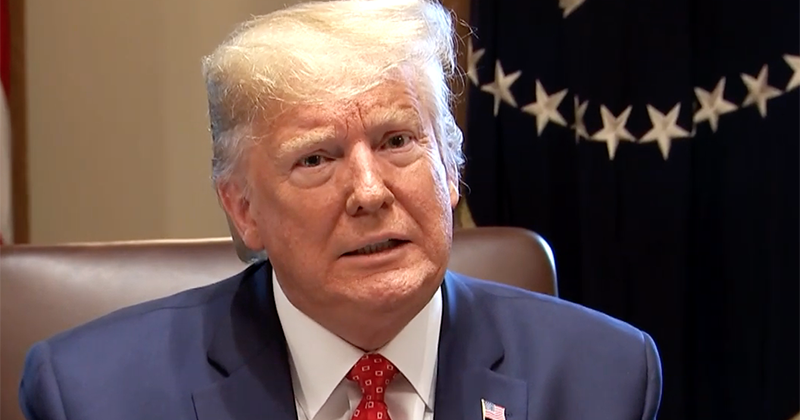 President Trump proclaimed Tuesday that people within the mainstream media are ‘sick’ for speculating that he is in poor health after an unscheduled visit to Walter Reed National Military Medical Center.

“I went for a physical and I came back. My wife said, ‘Darling are you okay? What’s wrong? Oh, they’re reporting you may have had a heart attack,’” Trump said Tuesday. “I went, I did a very routine, just a piece of it, the rest of it takes place in January, did a very routine physical. Visited the family, visited a couple of groups … I toured the hospital for a little while. I was out of there very quickly.” the President added.

“I got back home, and I get greeted with the news that, ‘we understand you had a heart attack,’” Trump said.

“These people are sick. They’re sick.” Trump urged, referring to the media, adding “the press really in this country is dangerous.”

“We don’t have freedom of the press in this country. We have the opposite. We have a very corrupt media, and I hope they can get their act straightened out because it’s very, very bad — very very dangerous for our country,” Trump added.

The official explanation for Trump’s visit was to complete initial parts of his annual physicals. However, because the medicals were not supposed to happen until January, some reporters started to stir the pot.

Earlier today on CNN, Dr. Sanjay Gupta said it's "a bit curious" that Trump went to Walter Reed for an unannounced visit. The W.H. said it was for a physical. Gupta wondered if the medical team had time to plan for his visit. Did they know he was coming ahead of time? (1/2)

CNN’s Chris Cillizza followed up with a video titled ‘You can’t trust the White House on Trump’s health’:

Other CNN hacks piled on:

This does not add up; the White House Medical Unit has very comprehensive facilities at the White House complex that could easily accommodate most of what is needed in an annual physical. As a fmr USSS Agent assigned POTUS, I have never seen the annual formality occur in stages. https://t.co/32KGdf8yXR

CNN then rolled out Barack Obama’s former physician, who immediately floated the theory that Trump has “neurological issues”:

If @realDonaldTrump trip to the Hispital was just an exam and bloodwork, all of that could have been done at the White House

Other Democrat hacks piled on:

Until they prove otherwise that’s the truth. Not a tweet. Not Grisham’s statement.

He media you might’ve missed it but Trump was rushed from the White House to the hospital with a weak cover story. If @HillaryClinton Had double dipped her potato chip at a cocktail party it would be a headline today and you would be calling for her to step down.

The Washington Post declared that Trump’s health is under ‘scrutiny’ again:

USA Today columnist Kurt Bardella argued that its fair game to question Trump’s health, because his own supporters questioned Hillary Clinton’s health during the election (even though she had coughing fits everyday and was seen on tape collapsing).

Newsweek cited Jon Cooper, the chairman of the Democratic Coalition, who claimed that it’s all a big conspiracy for Trump to resign claiming poor health before he can be impeached.

PREDICTION: Donald Trump will resign from office before he can be impeached, citing health reasons.

Salon declared that “the White House lied, and the press corps just swallowed it.”

White House Press Secretary Stephanie Grisham tweeted that “further speculation beyond the extensive & honest info I put out is wholly irresponsible & dangerous for the country.”

EXACTLY! Thank you for helping me get the correct information out. Further speculation beyond the extensive & honest info I put out is wholly irresponsible & dangerous for the country. https://t.co/gl6XOxgbmL

The White House added that Trump “Specifically, did not undergo any specialized cardiac or neurological evaluations.”

Meanwhile, more wild theories have posited that the unscheduled hospital visit was kept off the record and hushed up because Trump was actually suffering from food poisoning: