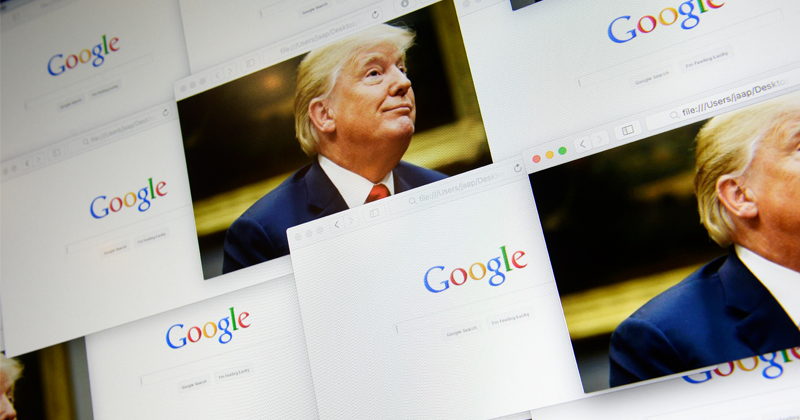 I was speaking with former ambassador and U.S. presidential candidate Alan Keyes yesterday, and he made the crucial point that since government is an extension of the People, politically-motivated censorship of the Peoples’ ability to engage in speech is, in fact, a form of treason against America.

It’s time for President Trump to seize the domain names of Google, Twitter, Facebook, YouTube and others, taking them offline until they agree to respect the fundamental civil liberties upon which any free society is based… namely, freedom of expression.

To achieve this aim, Trump merely needs to declare these tech giants to be engaged in criminal collusion to violate the civil rights of millions of Americans. Because of what’s at stake — the 2020 election and the very future of a free society — emergency actions must be taken to halt the treason of censorship and force these civil rights violating tech companies to respect the fundamental civil liberties enshrined in the First Amendment, without which no election can be legitimate, fair or free.

The Treason of Big Tech Must be Stopped Now, or the 2020 Election is Illegitimate From the Start

The tech giants are right now engaged in criminal collusion to silence all pro-Trump voices as a means to steal the 2020 election. These are crimes of treason against America, and those crimes must not go unanswered. When such powerful, multinational corporations decide to overthrow nations and install their own hand-picked leaders against the will of the people, those corporations must be not merely stopped from committing treason, but dismantled and prevented from ever operating again.

Google and the other tech giants now believe that they alone get to choose who becomes president, and that their un-elected, anti-American CEOs and in-house spooks get to appoint the leaders they want. The will of the people be damned. The First Amendment is being shredded by these criminal corporations that now pose the single greatest threat to the future of America and the free world.

It is time to stop their collusion and treason against America. Human freedom cannot coexist with tech giants’ censorship, so we either dismantle the tech giants or we kiss human freedom goodbye.

To restore freedom of speech in America, Trump must now identify the tech corporations that are violating the basic human rights of free citizens, then seize their domain names and shut them down, only allowing them to rejoin the internet community once they agree to operate as public utilities that provide services to all, regardless of political affiliation or types of speech.

The evil tech giants must also be forced to stopping banning apps that offer political speech they don’t like. Apple continues to ban the Natural News upgrade app, claiming that because we are critical of Satanism, abortion and vaccines, our app is not welcomed on Apple device. (Yes, Apple is pro satanism, infanticide and vaccine murder.)

Just as it would be wrong for a phone company to deny phone services to people based on the speech they express during phone calls, it is wrong and illegal for tech company gatekeepers to deprive Americans of their free speech civil rights merely because the tech companies don’t like what people are saying.

As you’d expect, they’re claiming that censorship of conservatives is merely enforcing “hate speech” provisions, but the catch-22 in all this is that lunatic Leftists believe all conservative speech is, by definition, hate speech. Thus, they are censoring political speech by deceptively labeling it “hate speech.”

This is unacceptable in a free society.

The censorship treason of the tech giants must be stopped, or America as we know it will cease to exist. To silence the speech of tens of millions of Americans based solely on their political views is simply irreconcilable with democracy in any form.

President Trump, seize the domain names of the tech giants and make them stop their treason. The very survival of this constitutional republic depends on the restoration of free speech online.

Arrest the CEOs and managers of the tech giants and charge them with treason. Restore freedom to all Americans by taking down the powerful, malicious corporations that directly oppose freedom.

Send Jack Dorsey to prison for life, which is actually a more merciful punishment that what he deserves.