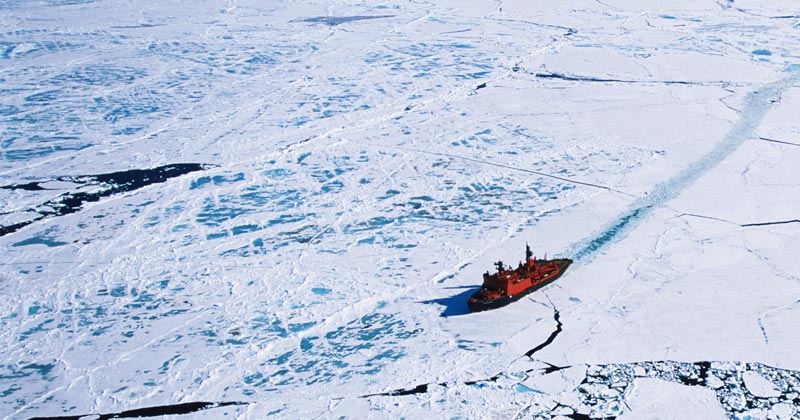 President Donald Trump has instructed his agencies to begin the buildup of a “fleet of polar security icebreakers” that would be fully operational by 2029, citing the need to protect US interests in the Arctic and the Antarctic.

In a memo issued to the State Department, Pentagon, Commerce, Energy and Homeland Security on Tuesday, Trump said the US needs to “develop and execute a polar security icebreaking fleet acquisition program.”

Homeland Security was put in charge of the effort to develop requirements for the build-up with a note that it must not adversely affect the acquisition of Offshore Patrol Cutters for the US Coast Guard.

The fleet will include “at least three heavy polar-class security cutters (PSC),” and a class of medium PSCs based on the “full range of national and economic security missions” such as resource exploitation and undersea cable maintenance.

The studies will determine the optimal number of icebreakers for “ensuring a persistent presence in both the Arctic and, as appropriate, the Antarctic regions.”

The US currently only has one operational heavy icebreaker, USCGC Polar Star, and one medium icebreaker, USCGC Healy. The Polar Star was built in the 1970s and is quickly approaching obsolescence. Trump instructed the agencies to identify options to “bridge the gap” until the fleet is ready, including buying or leasing vessels from other nations.

Moreover, the fleet will require at least two US basing locations and at least two international ones, which the agencies were ordered to identify and assess in light of the outlined mission. The assessment “shall account for potential burden-sharing opportunities for basing with the Department of Defense and allies and partners, as appropriate,” says the memo.

The State Department was instructed to work with Homeland Security to identify “partner nations” with shipbuilding expertise and capability.

Trump has long had his eye on the Arctic, floating the idea of buying Greenland from Denmark in August 2019. Though the Danes snubbed the US offer, Washington has continued to explore the possibility of acquiring the world’s largest island and the gateway to the Arctic ever since.

His predecessor Barack Obama vowed in 2015 to close the “icebreaker gap” with Russia – which at the time operated 34 such ships, 11 times as many as the US – but nothing came of that initiative. Since then, Russia has built several major nuclear-powered icebreakers, while China also got into the Arctic action by launching its first icebreaker in 2019.

It is highly unlikely the US will ask for any assistance from Russia, which currently has the lead in both the sheer number of icebreakers and the expertise to build and maintain them. Moscow has been bolstering its military and civilian presence in the Arctic for years, both because the northern ocean is its longest frontier and because the receding ice has opened the sea route between Europe and Asia for longer stretches of the year, with great commercial promise.