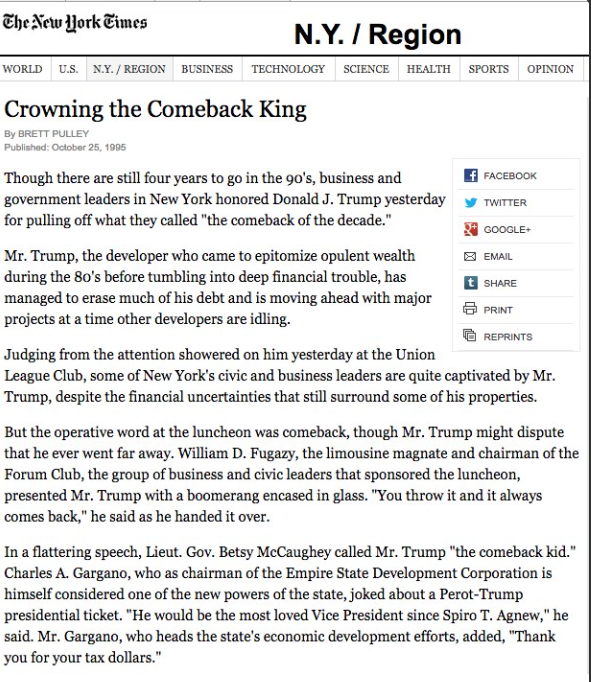 The New York Times thought they had a scoop about President Trump’s taxes from the 1980s, but they didn’t realize he talked all about it on his hit NBC show “The Apprentice.”

The 2004 episode shows Trump explaining how his casinos hit financial trouble in the 1980s, sending him reeling in debt for several years before eventually making his comeback, prompting him to write his 1997 book The Art of the Comeback.

“It wasn’t always so easy. About 13 years ago, I was seriously in trouble. I was billions of dollars in debt,” Trump said. “But I fought back and I won big league. I used my brain. I used my negotiating skills. And I worked it all out.”

The New York Times story basically confirmed what Trump said in 2004, indicating he had claimed $1 billion in business losses and paid little in taxes from the late 80s to the early 90s, but soon after bounced back and started paying taxes again.

“The numbers show that in 1985, Mr. Trump reported losses of $46.1 million from his core businesses — largely casinos, hotels and retail space in apartment buildings. They continued to lose money every year, totaling $1.17 billion in losses for the decade,” The Times reported Tuesday.

“Mr. Trump’s 2005 returns…showed that by then he had significant sources of income and was paying taxes.”

The Grey Lady even wrote a 1995 article praising Trump as the “Comeback King” following his financial turnaround.

Hard-hitting journalism, New York Times! Next time, maybe watch an episode or two of “The Apprentice” before you wind up with more egg on your face.

More than 100 workers have taken voluntary buyouts prompting rumors that huge layoffs lay ahead for the fake news network. Paul Joseph Watson discusses the consequences for the MSM when they spread propaganda to the American people.