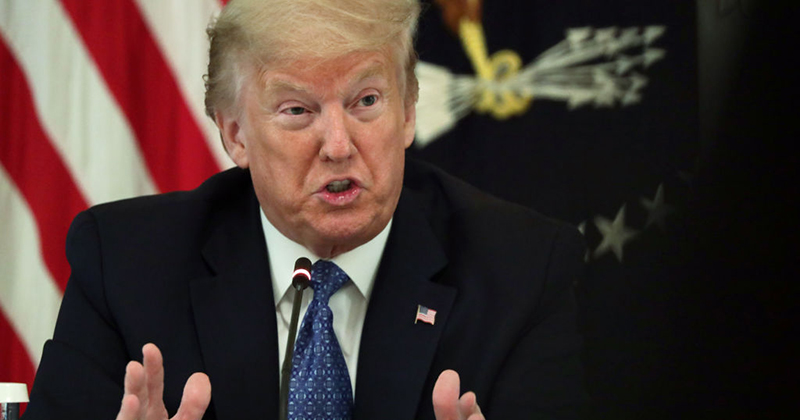 President Trump slammed Nancy Pelosi Tuesday, calling her a “sick woman” with a lot of “mental problems” after Pelosi said Trump should fear for his life taking hydroxychloroquine because he is ‘morbidly obese’.

Trump also hit out at a study on hydroxychloroquine, claiming it can have severe side effects leading to death, calling the results a “Trump enemy statement.”

“I’ve worked with doctors and if you look at the one survey – the only bad survey – they were giving it to people that were in very bad shape. They were very old, almost dead.” the President asserted.

“A lot of our front line workers take it because it possibly and – I think it does but you know these people are going to have to make up their own mind. Plus, it doesn’t hurt people. It’s been out of the market for 60 or 65 years for malaria, lupus and other things,” he said.

“I think it gives you an additional level of safety, but you can ask many doctors are in favor of it. Many front line workers won’t go there, unless they have the hydroxy.” the President continued.

“And so again this is an individual decision to make, but it’s had a great reputation. And if it was somebody else other than me, people would say gee isn’t that smart,” Trump quipped.

Yesterday, Senate Minority Leader Chuck Schumer claimed that Trump must have some financial interest in hydroxychloroquine, a claim that has previously been proven false.

“Maybe he has family or friends who own part of the company. It’s not unlike the president. Someone at Mar-A-Lago, calls him on the phone, tells him, ‘Oh, this is a good company,’ and he just talks about it. Maybe he did it to divert attention from all the bad things happening, and maybe he’s just lying.” Schumer told MSNBC’s Morning Joe.

“This president doesn’t tell the truth. He may be taking this, may not,” Schumer also charged, echoing host Joe Scarborough who proclaimed that “the president is not taking it, and yet, and yet, he’s telling Americans that they should take it.”