Since the election, President Trump has received many letters from inner-city community leaders and pastors in the African-American community urging him to realize the importance of community banking to restoring home-ownership in minority communities throughout the nation.

On May 1, 2017, President Trump invited a group of bankers from the Independent Community Bankers Association to the White House.

“Community banks are the backbone of small business in America,” President Trump noted. “Many of you are the reason that young families can purchase their first homes, farmers can buy their next tractor, and entrepreneurs can open up their first business, creating many, many new jobs in our country.”

As can be seen in the chart below, on May 2, 2017 Freddie Mac reported first quarter earnings and finally passed the critical threshold of paying the United States Treasury back its share of the $187 billion of principal it borrowed from the government during the financial crisis, plus the additional 10% dividend that they had negotiated with the U.S. Treasury under the 2008 Senior Preferred Stock Purchase Agreements (PSPAs).

On Friday, May 5, 2017, Fannie Mae reported it’s first quarter financial statements and is now spitting distance from that same repayment in full. By having chosen to allow the Net Worth Sweep to be paid at the end of the First Quarter 2017, President Trump has set himself up to announce:

“The GSEs have met their full responsibility to the taxpayers, and unlike the Troubled Asset Relief Program (TARP) signed into law by President George W. Bush in October 2008, and other bailouts, where at most the U.S. Treasury earned a 6-9 percent return, the GSEs have paid the U.S. Treasury over 26% percent returns. Now that there is no longer a question of ensuring the taxpayers be repaid as that has now happened, we must require the GSEs to build capital, we must fully implement the Housing and Economic Recovery Act of 2008 (HERA) so that we can ensure these companies are safe, sound, and never again place the taxpayer at risk.”

Ending the NWS now will appeal greatly to the thousands of community banks throughout the United States and to inner city community leaders that are asking for Fannie and Freddie to rebuild the capital required to finance home buyers in those inner city and minority communities that were largely ignored by former President Obama and his pro-Too-Big-to-Fail policies – a move that would allow the Trump administration to score important political points with traditional Democratic Party voting constituencies.

On March 23, 2017, a group that included the Community Home Lenders Association, the Community Mortgage Lenders Association, the Corporation for Enterprise Development (CFED), the Leadership Conference on Civil and Human Rights (LCCR), the League of United Latin American Citizens (LULAC), the Leading Builders of America, the NAACP, and the National Community Reinvestment Coalition (NCRC) wrote a letter to Treasury Secretary Mnuchin and to the Mel Watt, Director of the Federal Housing Finance Agency (FHFA, the federal agency regulating Fannie and Freddie).

“We are writing to express our concerns about the declining capital buffer at the government-sponsored enterprises – Fannie Mae and Freddie Mac – and to urge the Administration to take immediate steps to shore up their capital position in order to prevent a draw on the U.S. Department of the Treasury’s commitment of taxpayer funding for any non-credit related losses,” the groups wrote, urging the FHFA to end the NWS, by which the GSEs have sent their profits to Treasury each quarter since September 2012.

“We believe that it is critical that FHFA act now, with support from the U.S. Treasury. Existing authorities under both the Housing and Economic Recovery Act of 2008 and the Senior Preferred Stock Purchase Agreements allow the agency to take the steps necessary to protect taxpayers, low- and moderate-income homebuyers and small lenders across the country. While a draw on their U.S. Treasury commitments might create a sense of political urgency on Capitol Hill around housing finance reform, we are concerned about any precipitous legislative action on both the affordable housing mission of the Enterprises and equitable access to the secondary mortgage market by small lenders.”

On Dec. 30, 2016, a group of ministers associated with the United Methodist Baptist Association, largely from the New York City area, including Harlem, the Bronx, Queens, and Staten Island wrote to then-President-Elect Donald Trump noting that the United States was rapidly becoming a nation of home renters.

Arguing that American Homeownership in 2016 hit the lowest level in 51 years, the ministers agreed with Trump that now was the time to bring back the American Dream of home-ownership.

“You clearly understand better than most that Fannie Mae and Freddie Mac play a critical role in providing low- and moderate-income communities with opportunities for homeownership, increased financial mobility, and self- sufficiency,” the ministers noted. “Since their inception, Fannie Mae and Freddie Mac have acted to ensure that banks and other lenders would be able to extend mortgage credit in good times and in bad times.”

“Their important service to our economy, from 1938 to the present, has helped lift millions of families out of economic bondage and, by supporting homeownership, provided those families with a chance to join the middle-class, increase their self-sufficiency, and improve the social and educational outcomes of their children and communities.”

“However, as our communities of color seek to pursue those same goals today, Washington has inexplicably curtailed and threatened to eliminate the business functions performed by Fannie Mae and Freddie Mac,” the ministers’ letter concluded, arguing the importance of ending the NWS to allow Freddie and Fannie to recapitalize.

On April 27, 2017, Mel Watt answered these various community groups, noting that if the NWS continued, the capital position of Fannie and Freddie would decline to zero in January 2018. 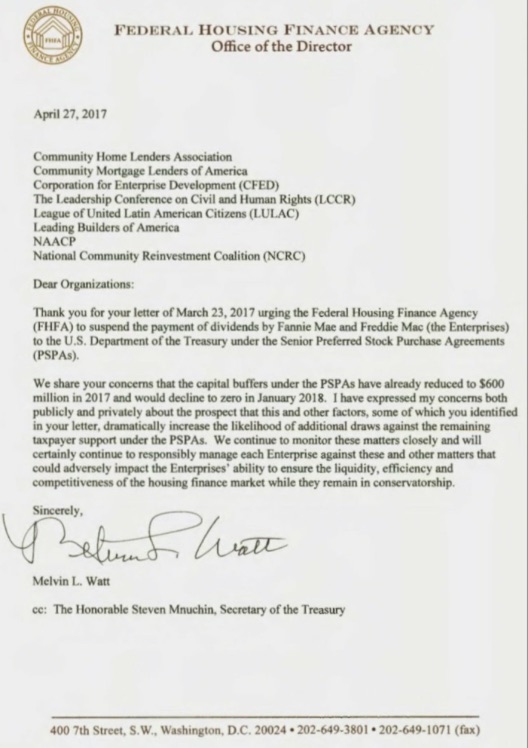 “We continue to monitor these matters closely and will continue to responsibly manage each Enterprise (Fannie and Freddie) against these and other matters that could adversely impact the Enterprises’ ability to ensure the liquidity, efficiency and competitiveness of the housing finance market while they remain in conservatorship,” he added.

In a speech that Watt delivered on Feb. 18, 2016, he made clear Fannie and Freddie could rebuild capital if the NWS were stopped.

“The remaining funds available under the Preferred Stock Purchase Agreements (PSPAs) provide the market with the assurance that the Enterprises can meet their guarantee obligations to investors in mortgage-backed securities even while they are in conservatorship and don’t have the ability to build capital,” Watt said.

Noting that by continuing the NWS, the funds Freddie and Fannie need to provide mortgage guarantees “can only go down and cannot be replenished.”

Clearly, by stopping the NWS when the PSPA principal and 10 percent dividend have been fully repaid to the Treasury, would give Fannie and Freddie an opportunity to replenish capital sufficiently, such that future infusions of government capital would not be needed.