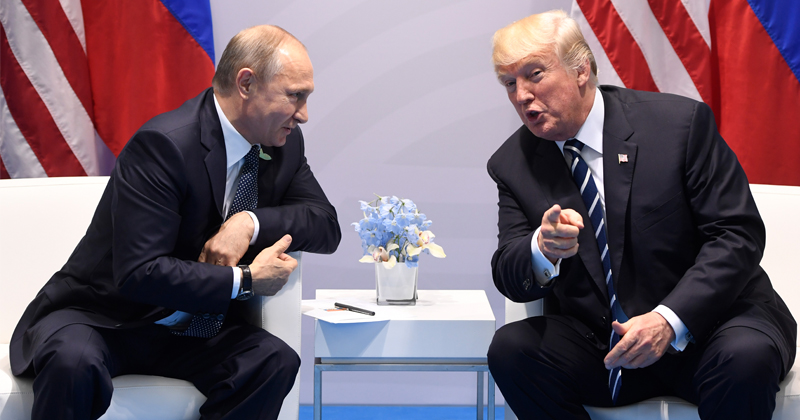 The two presidents agreed to continue contacts at various levels, the Kremlin’s press service said, adding that their conversation was constructive and meaningful.

Russian President Vladimir Putin and his US counterpart Donald Trump have held a phone conversation to discuss issues of strategic stability and arms control among other things, the Kremlin’s press service said in a press release on Thursday.

The two leaders reaffirmed the relevance of bilateral consultations on strategic stability and armaments, including the issue of New START.

“Issues pertaining to strategic stability and arms control were thoroughly discussed, with consideration of Russia’s and the United States’ special responsibility for maintaining international peace and security. Within this framework, the relevance of bilateral consultations on the matter was confirmed, including with regard to the Strategic Arms Reduction Treaty”, the press release read.

In late June, US Special Representative for Arms Control Marshall Billingslea and Russian Deputy Foreign Minister Sergey Ryabkov held marathon talks on the extension of the New Strategic Arms Reduction Treaty (New START). The landmark deal, which was concluded in 2010 and expires in February 2021, paves ways to maintaining stability and predictability in the face of the termination of the Intermediate-Range Nuclear Forces Treaty.

They also touched upon the issue of the Joint Comprehensive Plan of Action, also known as the Iranian nuclear deal, agreeing on the need for a collective effort to maintain stability in the region.

In July 2015, Iran signed a nuclear agreement with China, France, Russia, the United Kingdom, the United States, Germany and the European Union. The JCPOA stipulates that Iran must scale back its nuclear program and downgrade its uranium reserves in exchange for sanctions relief, including the lifting of the UN arms embargo five years after the accord was adopted.

The agreement has been in crisis since May 2018, when the US unilaterally withdrew from it and reintroduced sanctions on Tehran.

In addition, Putin and Trump talked about economic relations and the fight against coronavirus.

“They expressed mutual commitment to the development of Russian-American trade and economic cooperation. They assessed as positive their cooperation in the fight against the spread of the coronavirus infection”, a statement on the Russian president’s website read.

Putin suggested earlier in the year holding the key UNSC members’ summit in 2020, the year that marks the 75th anniversary of the United Nations. Among the proposed topics are world affairs, global security, economy and the pandemic crisis, as well as climate change and cyberthreats.