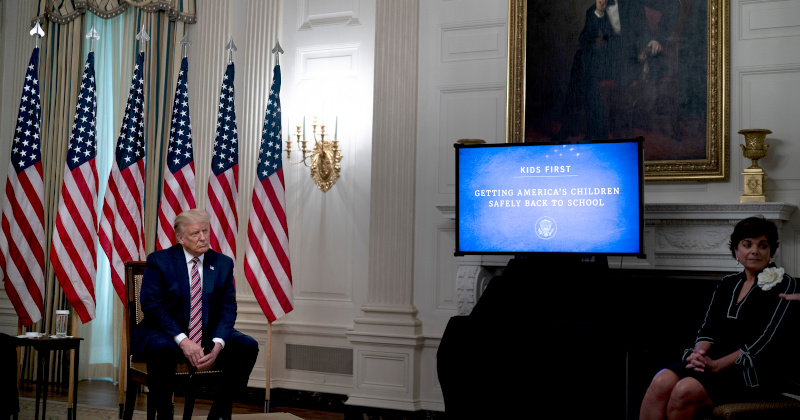 US President Donald Trump says that teams from the US Centers for Disease Control and Prevention will stand ready for possible deployment as schools across the nation reopen for in-school classes.

Speaking to members of the press on Wednesday, Trump listed a series of general recommendations for upcoming school openings.

The US president also reiterated his proposal for $70 billion in funding for kindergarten to 12th grade (K-12) schools, giving preference to schools that reopen for in-person classes.

According to the proposal, originally announced back in July, “approximately $35 billion of the $70 billion will be reserved for schools that reopen.”

“I think the money should follow the student,” Trump argued from the Eisenhower Executive Office Building in Washington, DC. “That’s something we want to do, and we’re having a hard time with the Democrats.”

The @WhiteHouse general recommendations for all schools re-opening during the #coronavirus pandemic now being read by @POTUS. pic.twitter.com/bahQ2cugMH

He went on to say that 125 million reusable face masks would be provided to school districts across the country.

The US president also claimed that “99.5%” of COVID-19 novel coronavirus deaths are among adults and that children experience “mild symptoms.” He added that children who do experience medical complications “often have underlying medical conditions.”

“I have a feeling on November 4 that somebody is going to announce, ‘Schools are open. The country is open. Everything is open.’ I really believe a lot of this is done for political reasons, if you want to know the truth,” the president claimed on Wednesday.

Sen. Kamala Harris (D-CA), who has been selected as the running mate of former Vice President and presumptive Democratic presidential nominee Joe Biden, called out Trump during a Tuesday rally in Delaware.

“This is what happens when we elect a guy who just isn’t up to the job – our country ends up in tatters, and so does our reputation around the world.”

She also called out the US president for his COVID-19 response.

“His refusal to get testing up and running, his flip-flopping on social distancing and wearing masks. His delusional belief that he knows better than the experts. All of that is the reason and the reason an American dies of COVID-19 every 80 seconds,” she expressed, as reported by CNBC.


Responding to Harris’ remarks, Trump claimed that she has “her facts wrong.” He also stated that he cannot wait for Vice President Mike Pence to debate Harris.