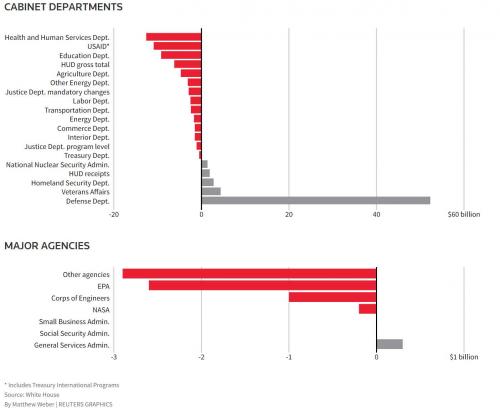 Today at 7am, Trump released his “skinny budget”, his administration’s first federal budget blueprint revealing the President’s plan to dramatically reduce the size of the government.

As previewed last night, the document calls for deep cuts at departments and agencies that would eliminate entire programs and slash the size of the federal workforce. It also proposes a $54 billion increase in defense spending, which the White House says will be offset by the other cuts.

“This is the ‘America First’ budget,” said White House budget director Mick Mulvaney, a former South Carolina congressman who made a name for himself as a spending hawk before Trump plucked him for his Cabinet, adding that “if he said it in the campaign, it’s in the budget.”

In a proposal with many losers, the Environmental Protection Agency and State Department stand out as targets for the biggest spending reductions. Funding would disappear altogether for 19 independent bodies that count on federal money for public broadcasting, the arts and regional issues from Alaska to Appalachia. Trump’s budget outline is a bare-bones plan covering just “discretionary” spending for the 2018 fiscal year starting on Oct. 1. It is the first volley in what is expected to be an intense battle over spending in coming months in Congress, which holds the federal purse strings and seldom approves presidents’ budget plans.

Trump wants to spend $54 billion more on defense, put a down payment on his border wall, and breathe life into a few other campaign promises. His initial budget outline does not incorporate his promise to pour $1 trillion into roads, bridges, airports and other infrastructure projects.  The budget directs several agencies to shift resources toward fighting terrorism and cybercrime, enforcing sanctions, cracking down on illegal immigration and preventing government waste.

The White House has said the infrastructure plan is still to come.

That said, Congress controlled by Trump’s fellow Republicans, is likely to reject some or many of his proposed cuts with some republicans calling the budget “dead on arrival.” Some of the proposed changes, which Democrats will broadly oppose, have been targeted for decades by conservative Republicans. Moderate Republicans have already expressed unease with potential cuts to popular domestic programs such as home-heating subsidies, clean-water projects and job training.

Trump is willing to discuss priorities, said Mulvaney. “The president wants to spend more money on defense, more money securing the border, more money enforcing the laws, and more money on school choice, without adding to the deficit,” Mulvaney told a small group of reporters during a preview on Wednesday. “If they have a different way to accomplish that, we are more than interested in talking to them,” Mulvaney said.

The defense increases are matched by cuts to other programs so as to not increase the $488 billion federal deficit. Mulvaney acknowledged the proposal would likely result in significant cuts to the federal workforce. “You can’t drain the swamp and leave all the people in it,” Mulvaney said.

Here is a visual summary of the proposed budget changes is shown below, courtesy of Reuters:

Trump asked Congress to slash the EPA by $2.6 billion or more than 31 percent, and the State Department by more than 28 percent or $10.9 billion. Mulvaney said the “core functions” of those agencies would be preserved. Hit hard would be foreign aid, grants to multilateral development agencies like the World Bank and climate change programs at the United Nations.

Trump wants to get rid of more than 50 EPA programs, end funding for former Democratic President Barack Obama’s signature Clean Power Plan aimed at reducing carbon dioxide emissions, and cut renewable energy research programs at the Energy Department. Regional programs to clean up the Great Lakes and Chesapeake Bay would be sent to the chopping block.

Long reviled by conservatives, the Internal Revenue Service would get a $239 million cut, despite Treasury Secretary Steven Mnuchin’s request for more funding. The Education Department would receive $1.4 billion to invest in public charter schools and private schools, even as its overall budget is cut by 14 percent. But other numbers appear to contradict some of Trump’s top priorities. One of his campaign pledges was to work to cure diseases, but the National Institutes of Health will reportedly see $5.8 billion slashed from its budget.

Trump calls for a 13 percent cut to the Transportation Department, which would ostensibly play a big role in Trump’s promised infrastructure overhaul. That includes $500 million from the TIGER grant program, which provides funding for road and bridge projects.

Trump’s rural base did not escape cuts. The White House proposed a 21 percent reduction to the Agriculture Department, cutting loans and grants for wastewater, reducing staff in county offices and ending a popular program that helps U.S. farmers donate crops for overseas food aid.

White House officials looked at Trump’s campaign speeches and “America First” pledges as they crunched the numbers, Mulvaney said. “We turned those policies into numbers,” he said, explaining how the document mirrored pledges to spend more on the U.S. nuclear weapons arsenal, veterans’ health care, the FBI, and Justice Department efforts to fight drug dealers and violent crime.

The Department of Homeland Security would get a 6.8 percent increase, with more money for extra staff needed to catch, detain and deport illegal immigrants. Trump wants Congress to shell out $1.5 billion for the border wall with Mexico in the current fiscal year – enough for pilot projects to determine the best way to build it – and a further $2.6 billion in fiscal 2018, Mulvaney said.

The estimate of the full cost of the wall will be included in the full budget, expected in mid-May, which will project spending and revenues over 10 years. Trump has vowed Mexico will pay for the border wall, which the Mexican government has flatly said it will not do. The White House has said recently that funding would be kick-started in the United States.

The voluminous budget document will include economic forecasts and Trump’s views on “mandatory entitlements” – big-ticket programs like Social Security and Medicare, which Trump vowed to protect on the campaign trail.

“There is no question this is a hard-power budget,” said Mulvaney. “It is not a soft-power budget.”