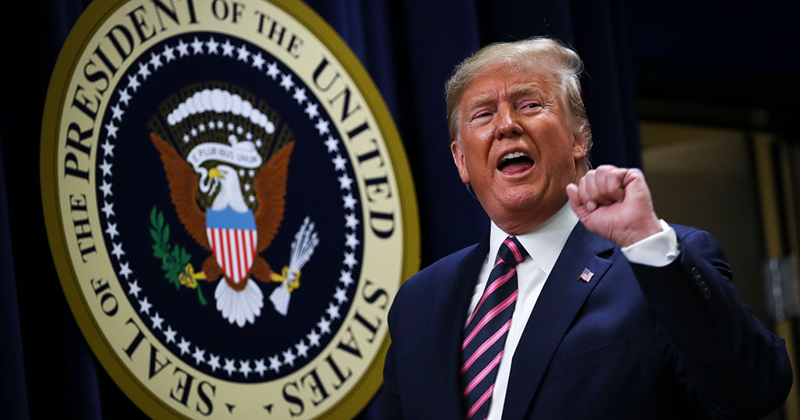 President Trump scored a major legislative victory Thursday, as the United States-Mexico-Canada Agreement (USMCA) passed in both chambers of Congress and now heads to Trump’s desk to be signed into law.

Trump noted that Nancy Pelosi has stalled passing the deal, which will create hundreds of thousands of jobs, for some time, and only decided to hold a vote on it after Democrats forced through articles of impeachment against the President.

The great USMCA Trade Deal (Mexico & Canada) has been sitting on Nancy Pelosi’s desk for 8 months, she doesn’t even know what it says, & today, after passing by a wide margin in the House, Pelosi tried to take credit for it. Labor will vote for Trump. Trade deal is great for USA!

“House passage of the USMCA with such huge bipartisan support is a major milestone and shows just how much President Trump is successfully changing U.S. trade policy so it works for the benefit of American workers, farmers, ranchers and businesses.

The USMCA is expected to create between 176,000 and 589,000 new American jobs and substantially increase economic growth. The International Trade Commission’s analysis shows that USMCA will have a more positive impact on our economy, jobs and wages than any other U.S. trade agreement ever negotiated.”

“It will create tens of thousands of new jobs—many importantly in manufacturing—and increase export opportunities for our farmers, ranchers and businesses. President Trump is keeping his promise to replace the failed NAFTA with a far better trade agreement,” Lighthizer said.

It was incredibly telling that the so called ‘squad’ of far left Democrats, Alexandria Ocasio-Cortez (D-NY), Ilhan Omar (D-MN), and Rashida Tlaib (D-MI) all voted against the trade agreement, along with 35 other Democrats.

A recent survey by Zogby found that 67% of voters “believe the Democrats are more interested in impeaching the president as opposed to passing legislation.”

The poll also noted that 53% of Democrats agree with that statement.

“This feeling of politics first permeated a majority of every subgroup: all felt that Democrats in Congress were more concerned with impeaching the president rather than passing legislation that helps Americans.” Jonathan Zogby remarked to The Washington Examiner.