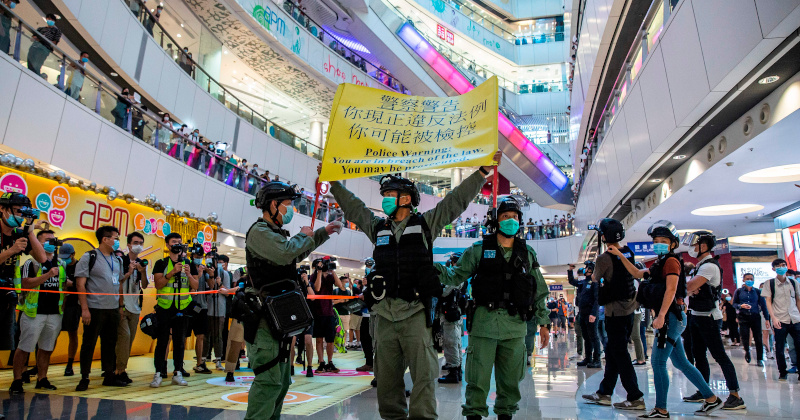 US President Donald Trump has signed legislation he said would punish Beijing for “oppressive acts” in Hong Kong and an executive order ending all preferential treatment for the territory, including special trade arrangements.

Trump announced the signing of the Hong Kong Autonomy Act during a press conference on Tuesday, a law he said will sanction Chinese individuals and organizations involved in “extinguishing Hong Kong’s freedom.”

The bill is joined by a new executive order stripping Hong Kong of its special status, with Trump saying the territory “will now be treated the same as mainland China – no special privileges, no special economic treatment, and no export of sensitive technologies.” The president noted that this would mean one less competitor for the US.

He used most of his televised address from the Rose Garden to attack his rival in the November election, former Vice President Joe Biden, alleging that he and Barack Obama allowed Beijing to take advantage of the United States.

“Joe Biden supported China’s entry into the World Trade Organization, one of the greatest geopolitical and economic disasters in world history,” Trump said, insisting the former VP had given ‘gifts’ to the Chinese Communist Party.

The president also took shots at Chinese telecom giant Huawei, saying it posed a “big security risk” and that he had personally “convinced many countries” to avoid the company’s technology. In addition to China, Trump made a brief detour to hit on the European Union, arguing the body did not serve US interests.

Quite an circuitous opening statement from Trump in the Rose Garden — from China trade to “China virus” to whacking Biden to repairing bridges to blaming Cuomo for thousands of deaths to complaining Pence works hard for no credit to bemoaning people call him xenophobic to Hunter.


Both the new bill and the accompanying executive order come as tensions mount between Washington and Beijing, with the Trump administration stepping up a rhetorical and policy offensive against China in recent months.

After being tasked with assessing Hong Kong’s autonomy status under a law passed last year, the State Department declared in May that the territory had indeed lost its freedom from Beijing, vowing to strip it of its special trade and diplomatic relationship with the US – a threat made good with Tuesday’s order.

China has repeatedly slammed such moves as intrusions into its internal affairs and warned of retaliation, most recently imposing a tit-for-tat travel ban on US lawmakers following a new round of sanctions on Chinese officials.