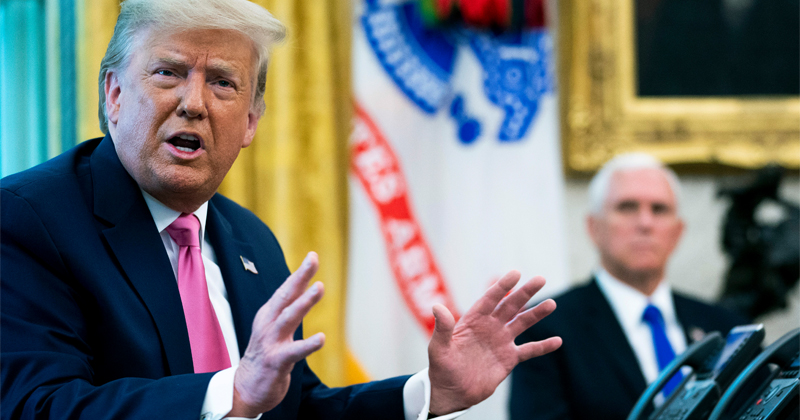 President Trump on Tuesday signed an order which will bar immigrants living in the United States illegally from being included in the 2020 census for purposes of apportioning members of Congress to states.

According to the memo, it will be the “policy of the United States to exclude from the apportionment base aliens who are not in a lawful immigration status under the Immigration and Nationality Act.”

It directs Commerce Secretary Wilbur Ross to provide Trump with data on the number of undocumented residents in order to exclude them from population totals which determine how many seats each state receives in Congress, according to NBC News.

“We will collect all of the information we need to conduct an accurate census and to make responsible decisions about public policy, voting rights, and representation in Congress,” said Trump in a Tuesday statement.

The administration argues that the U.S. Constitution does not specifically define which “persons” must be included in the apportionment base, noting that documented immigrants who are in the country temporarily and certain foreign diplomatic personnel are “persons” who have been excluded from the apportionment base in past censuses.

It was not immediately clear how undocumented immigrants would be identified in order to omit them from the census count. The census questionnaire, which was distributed in March, did not require respondents to indicate whether they or others in their household are citizens. –NBC News

Last year the Trump administration attempted to add a citizenship question to the 2020 census for the first time in six-decades, a bid which was struck down by the Supreme Court, which prevented the Department of Commerce from including the question thanks to Chief Justice John Roberts – a Bush II appointee, joining the four-member liberal wing of the court.

The ACLU has vowed to take the Trump administration to court over the new census memo.

BREAKING: Trump tried to add a citizenship question to the census and lost in the Supreme Court.

His latest attempt to weaponize the census for an attack on immigrant communities WILL be found unconstitutional.


“The Constitution requires that everyone in the U.S. be counted in the census. President Trump can’t pick and choose,” said ACLU Voting Rights Project director Dale Ho, who knocked the Trump administration.

“He tried to add a citizenship question to the census and lost in the Supreme Court. His latest attempt to weaponize the census for an attack on immigrant communities will be found unconstitutional. We’ll see him in court, and win, again,” said Ho.

According to NBC News, the Constitution requires that the census count “persons” living in the United States, and does not mention citizenship status. While lower courts have ruled that illegal immigrants should be counted, the Supreme Court has yet to weigh in.

“The resident population counts include all people (citizens and non-citizens) who are living in the United States at the time of the census,” reads the Census Bureau’s website. “People are counted at their usual residence, which is the place where they live and sleep most of the time.”