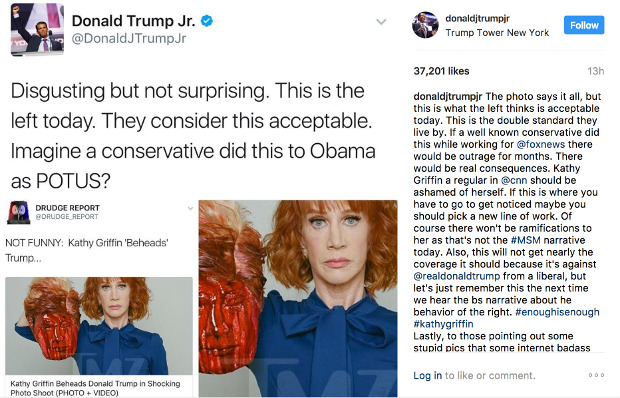 Donald Trump unloaded on ‘sick’ Kathy Griffin this morning via Twitter after she ignited a firestorm of backlash with her disturbing ISIS-inspired photo shoot depicting her holding a bloodied imitation of the President’s head.

Trump pointed out that Griffin’s tasteless ‘art’ has been traumatizing for his family to witness, particularly his young son, Barron.

“Kathy Griffin should be ashamed of herself. My children, especially my 11 year old son, Barron, are having a hard time with this. Sick!” he wrote in a Tweet that has garnered 80,000 ‘likes’ in the first three hours.

Kathy Griffin should be ashamed of herself. My children, especially my 11 year old son, Barron, are having a hard time with this. Sick!

“Kathy Griffin wants Donald Trump’s head … but she wants it bloody and detached from his body,” wrote TMZ, who were the first to release the gruesome image, also noting that Griffin and her photographer, Tyler Shields, recognized they might be breaking the law. “During the photo shoot, Kathy joked that she and Tyler would need to move to Mexico once the pics got released, for fear they’d be thrown in prison.”

The U.S. Secret Service has taken notice of Griffin after many outraged social media users reported her to the agency, and appears to be investigating the matter.

“On it! @SecretService has a robust protective intelligence division that monitors open source reporting & social media to evaluate threats,” they wrote. “Threats made against @SecretService protectees receive the highest priority of all of our investigations.”

On it! @SecretService has a robust protective intelligence division that monitors open source reporting & social media to evaluate threats

Threats made against @SecretService protectees receive the highest priority of all of our investigations. #ProtectionNeverRests

While Barron Trump does not communicate with the general public, Donald Trump Jr. does, and has blasted Griffin, as well as her fellow travelers on the left and in the mainstream media – specifically CNN, whose annual special on New Year’s Eve is co-hosted by Griffin and Anderson Cooper.

“Disgusting but not surprising. This is the left today. They consider this acceptable. Imagine a conservative did this to Obama as POTUS?” wrote Trump Jr. in a retweet of media mogul, Matt Drudge, who deemed the stunt “not funny.”

Disgusting but not surprising. This is the left today. They consider this acceptable. Imagine a conservative did this to Obama as POTUS? https://t.co/QdghcbIjS7

Dear @CNN, I must have missed your statement banning your commentator #KathyGriffin from future shows. Please resend. Thx

Donald Jr. released a lengthier statement on Instagram before also noting the trauma his own young children would experience in the fallout of the attack on their grandfather, saying, “I’m counting down having to explain it to my 8 and 10 year olds who I’m sure will see/hear about it at school.”

And I'm counting down having to explain it to my 8 and 10 year olds who I'm sure will see/hear about it at school. https://t.co/efDaLxbXZs

While Griffin may have set a new (low) bar, calls for violence and murder from the left – and action upon them – against President Trump and his supporters have become commonplace in the last two years, with wholehearted support of this jihad coming from Hollywood and the mainstream media.

“It’s all about creating an atmosphere where it seems ‘acceptable’ to kill the president, and the establishment’s hope is that some deranged lunatic mesmerized by Trump-hating celebrities will carry out the deed,” wrote Infowars’ Kit Daniels after rapper Snoop Dogg released a music video featuring a scene of himself assassinating President Trump. “Just think of it as a gas-filled room that only needs a spark to explode.”

Paul Joseph Watson illuminated the union between leftist extremists and radical Islamists long before Griffin’s photo shoot, writing in February, “To witness the regressive left now brazenly embracing violence and domestic terrorism is chilling but not that surprising given their increasingly close alliance with Islamists, to the point where ISIS is now working to recruit far-left activists because the two groups broadly share the same goal.”

Griffin has issued an apology for the photos, which many have deemed insincere, and she has been fired as the face of Squatty Potty.