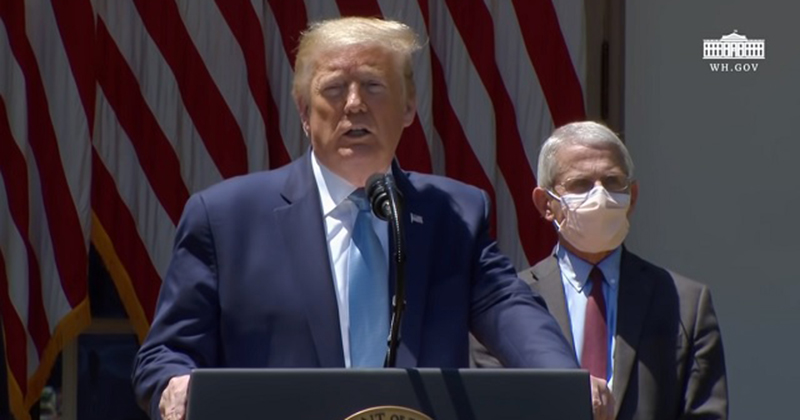 Make of this what you will.

President Trump has stated that a future coronavirus vaccine will be voluntary.

On Friday, the president introduced “Operation Warp Speed,” an ambitious Manhattan Project-style initiative to fast-track the development and distribution of a coronavirus vaccine by January 2021, tapping experts and resources in science, medicine, the military, and the private sector.

Owen Shroyer and David Knight guest host The Alex Jones Show to break down how Bill Gates is pushing a vaccine that he would never get himself.

Experts have warned that the plan raises serious ethical and safety questions which are of grave importance not only to pro-life citizens, but to everyone.

However, President Trump did allay concerns about a mandatory vaccine on Friday, saying that the new vaccine would be for those “who want to get it,” adding, “Not everyone is going to want to get it.”

After he had previously introduced the idea of mobilizing the military to help deploy the new vaccine, some were concerned that this hinted that the drug would be forcibly administered. One website asked, “what will you do when they come to your door, and tell you it’s mandatory?”

Anxiety about possible medical strong-arming by the military easily piggy-backed on top of wide speculation that legislation introduced in Congress earlier this month, known as the TRACE Act — the “COVID-19 Testing, Reaching, And Contacting Everyone Act” — would result in massive assaults by government agents against the constitutional rights of Americans.

I like many others voted for Trump because, among other reasons, he said he would create a vaccine safety commission and appoint Robert Kennedy Jr. as the head of it.

As with much of what Trump ran on, he never followed through.

RFK Jr said in an interview in January that Trump got a $1 million contribution from Pfizer towards his inauguration “immediately after” their meeting and then he “took people who were vaccine lobbyists [and] appointed them to the highest positions at CDC and HHS and we were cut off.”

Trump also just appointed Big Pharma exec Moncef Slaoui to head “Operation Warp Speed” to rush out a vaccine in months despite the risk it could massively backfire.

Optional or not, mobilizing the military to rush a vaccine through safety trials & deliver it to the American people is insane.

If this was Obama, Biden, Clinton or Bush — no one would allow this. Stand up for what you believe in. Don’t be another sheep.
pic.twitter.com/h5WIH52SIa