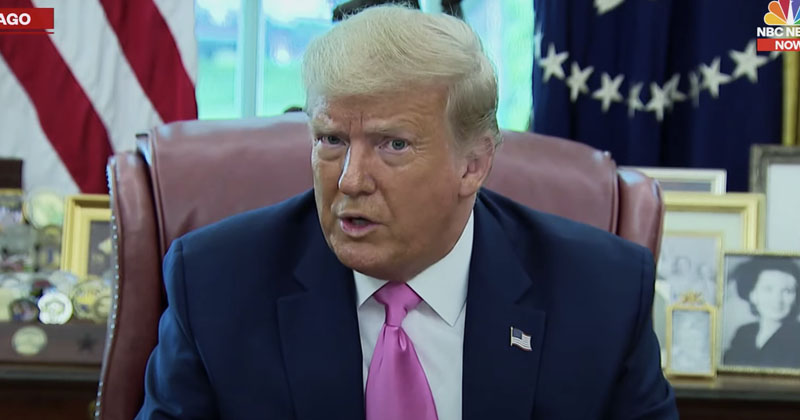 President Trump hinted Monday that he may authorize federal officials to carry out mass arrests of Antifa terrorists in blue cities across America.

During a White House briefing, Trump said he’ll likely expand the federal response to Antifa and Black Lives Matter violence from Portland to many other cities plagued with left-wing violence like New York, Chicago, Baltimore, Oakland, and others.

“We’re not going to let this happen in our country. We’re going to have more federal law enforcement, that I can tell you,” Trump told reporters.

“In Portland, they did a fantastic job, they’ve been there three days, and they really have done a fantastic job in a short period of time, no problem. They grab ’em, lot of people in jail, their leaders. These are anarchists. These are not protesters…these are people that hate our country.”

“Well it depends on what your definition of ‘troops’ is. We’re sending law enforcement.”

REPORTER: So what are you planning on doing?

Trump noted that all the chaos and mayhem is originating in Democrat-run cities, where Antifa and BLM have free reign to loot and riot.

“Because we’re not going to let New York and Chicago and Philadelphia and Detroit and Baltimore and all of these – Oakland is a mess. We’re not going to let this happen in our country. All run by liberal Democrats,” Trump added. “The governors, the mayors, the senators out there are afraid of these people, may be they are physically afraid of these people.”

Acting Department of Homeland Security Deputy Secretary Ken Cuccinelli added that the Trump administration is prepared to deploy more federal officials in other riot-stricken cities regardless of whether governors approve.

“If we get the same kind of intelligence in other places about threats to other federal facilities or officers, we would respond the same way,” he said.

Ken Cuccinelli, acting deputy secretary of the DHS, says federal officials had “intelligence about planned attacks on federal facilities” in Portland, Oregon.
“If we get the same kind of intelligence in other places… we would respond the same way.”https://t.co/ZuxJMTwxjo pic.twitter.com/L70hrCz3w8

“The local leaders there in Portland have fostered this environment that allows these individuals to again attack the courthouse and do these very violent acts, destructive acts night after night after night,” Wolf told Fox News on Monday. “The facts don’t lie and the facts are that these violent anarchists and extremists were violent well before DHS surged federal assets into Portland.”

Alex Jones exposes the domestic terror acts of Antifa/Marxist/BLM rioters and how they triggered the action of federal law enforcement.