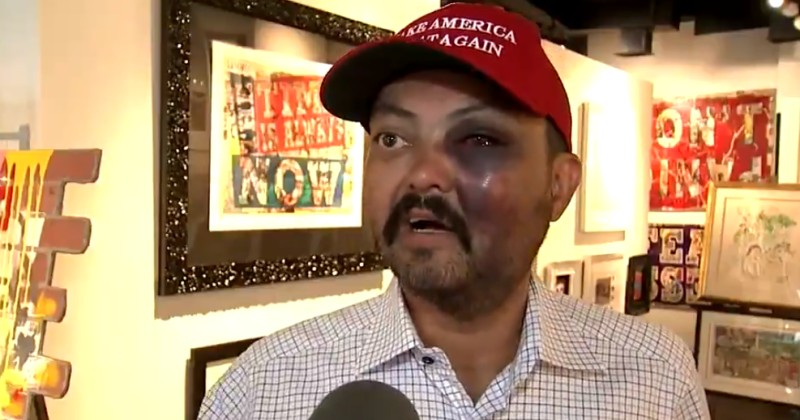 A Trump supporter was brutally beaten by a gang of teens for wearing a MAGA hat, leaving him with a huge black eye and substantial swelling.

Jahangir “John” Turan said he was walking past an event near Canal Street in SoHo when he was set upon by the mob, who were screaming “f*ck Trump!” – at around 6:30pm on Tuesday evening.

I got jumped for wearing this hat, they started cursing at me – ‘Trump hat bla bla bla’ – and basically one kid took my head and bashed it against a scaffolding poll and it all happened within 10 seconds,” said Turan.

Jahangir "John" Turan says he was attacked and beaten by a group of teens for wearing his MAGA hat. They yelled obscenities like “f— Trump!"

THIS is the so called "tolerant left." pic.twitter.com/7hMCGCDW6T

“I jumped out, crossed the street and called the cops,” he added.

As you can see from the video, Turan’s injuries look incredibly painful and he was lucky not to be left in hospital.

There have been numerous cases of assault and harassment over Trump supporters wearing the distinctive red MAGA hat.

As we reported earlier this year, a deranged leftist pulled a gun on a Trump supporter in Kentucky and told him “it’s a good day for you to die” simply because the man was wearing a MAGA hat.