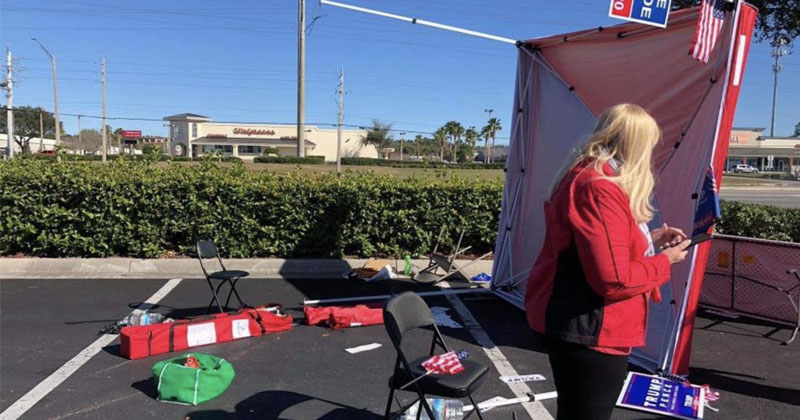 Approximately six Trump supporters were attacked in the parking lot of a Jacksonville, Florida Walmart Saturday afternoon at around 3:50 p.m. when a man in his 20s plowed through a voter registration tent, according to the local Sheriff’s Office.

JSO: White man, 20’s, drives through voter registration tent for local GOP, endangering people & damaging tent, tables. No injuries. When asked if this was politically motivated: “At this point we don’t know the motivation of the suspect but the investigation is just starting.” pic.twitter.com/1qMQHnnS9t

“It happened so quickly,” said volunteer Nina Williams, one of five women who were working the tent. “I just barely got out of the way.”

After driving through the tent, the man stopped, took a video, and flipped off the Republicans before driving off.

“Kind of out of the blue, a man approached us in a van, was waving at us, kind of a friendly demeanor, thought he was coming up to talk to us, instead he accelerated his vehicle and plowed right into our tent, our tables,” said Volunteer Mike Alfiere, the sixth volunteer, adding “After he ran over everything, he backed up, took out a cell phone, kind of recorded the damage, made some obscene gestures at us and then proceeded to leave the complex.”

Update: The Jax Sheriff’s Office has arrested Gregory Timm, 27, in connection with the incident. He has been charged with aggravated assault, criminal mischief and driving on a suspended license.

#JSO has arrested the suspect who drove through the voter registration tent in the area of 11900 Atlantic Boulevard.

Responding to the incident, the Duval Country Democratic Party issued a statement condemning the act, saying “No one’s life should be placed in danger for exercising their first amendment rights.”

.@DuvalDEC condemns this incident & says it looks forward to suspect’s arrest. Again, motivation of suspect not known, per JSO. @ActionNewsJax will have a live report at 10. pic.twitter.com/XT1KDsyGi6

“The hate is toxic and dangerous,” tweeted Jacksonville Mayor, Lenny Curry. “Thankfully no one was injured but certainly they are shaken after being targeted because they were registering voters.”

Sadly, this happened. I spoke to the GOP chair. This is outrageous. The hate is toxic and dangerous. Thankfully no one was injured but certainly they are shaken after being targeted because they were registering voters. I’ve spoken to the Sheriff & of course his team is on this https://t.co/dRENZi0Bxq

President Trump weighed in Saturday afternoon, tweeting “Law Enforcement has been notified. Be careful tough guys who you play with!“

Law Enforcement has been notified. Be careful tough guys who you play with! https://t.co/1Pq0hOrzy2

JPO detectives will be looking into this as a case of aggravated assault, and have withheld comment on the driver’s motivation.

Rep. Steve Scalise (R-LA), the target of a violent 2017 shooting at the hands of a Bernie Sanders supporter, tweeted “@realDonaldTrump supporters shouldn’t have to fear for their lives while registering people to vote,” adding “This can’t be the new normal. Democrats need to join me in condemning this behavior.”

Enough.@realDonaldTrump supporters shouldn’t have to fear for their lives while registering people to vote.

There’s no place for violence in politics. We settle differences at the ballot box.

This can’t be the new normal. Democrats need to join me in condemning this behavior. https://t.co/vV87snuY0s

And former Florida governor Sen. Rick Scott tweeted “@DuvalGOP will not be silenced or intimidated. They will redouble their efforts to support strong Republicans in NE Florida and around the state!”

This appears to be a politically-motivated attack on hard-working volunteers in Duval County. Thankful that no one was hurt. @DuvalGOP will not be silenced or intimidated. They will redouble their efforts to support strong Republicans in NE Florida and around the state! https://t.co/F4Qi7hk7CR

A Van intentionally drove through a Republican Party voter registration tent in Jacksonville.

No one was hurt, but this was an act of Targeted Political Violence.

The Left has openly encouraged hostility toward Conservatives, this must be condemned.#TrumpSupportersAttacked pic.twitter.com/lkM1POjw7A

Short on time, but still want to stay informed? The War Room Countdown covers clips from all 3 hours of the broadcast!