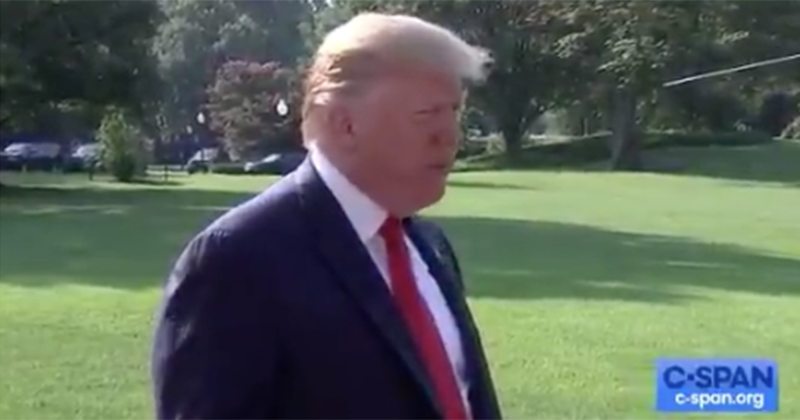 While Democrats and their talking heads continue to directly blame the President for the El Paso shooting, and literally label him a neo-nazi, Trump told reporters Wednesday that he does not blame Elizabeth Warren, or any Democrats for the Dayton shooting, which was carried out by a left wing extremist.

While Warren and other Democrats went low, Trump took the high ground and noted that the only person responsible in any mass shooting is the mentally disturbed shooter.

President Trump on the news the killer in Dayton was a pro-Antifa leftist: "I don't blame Elizabeth Warren and I don't blame Bernie Sanders in the case of Ohio, and I don't blame anybody. …These are sick people, these are people that are really mentally ill, mentally disturbed." pic.twitter.com/zUTHlunB5P

That’s a far cry from what Warren and the other Democrats are saying, even though the Ohio shooter was a Warren supporter.

We need to call it out: Fox News is a hate-for-profit machine that gives a megaphone to racists and conspiracists. https://t.co/f1QkIE7sbB

Can the Democrats go any lower?

Even CNN and the Washington Post have penned articles noting that blaming Trump or his supporters instead of the deranged shooters is ridiculous.

Trump was also in Dayton Wednesday, where he was warmly recieved by first responders and families of those affected.

Here are some pictures and footage of the grown ups:

Dayton, Ohio, Mayor Nan Whaley: "I think the victims and the first responders were grateful that the President of the United States came to Dayton." pic.twitter.com/kN6Rid0xT4

We love you Dayton, Ohio! pic.twitter.com/IaCZAdyuzL

The people I met today in Dayton are the finest anywhere! pic.twitter.com/sBxKZWExcR

MSNBC was shocked that people reacted positively toward the President.

MSNBC surprised at their own reporting!

El Paso residents reaction to @RealDonaldTrump visit is “surprisingly positive,” “calls for unity and a great spirit of togetherness.” pic.twitter.com/CiBiIyLbDT

Not everyone is a f*cked up permanently triggered Antifa supporting loon, that’ll be one reason.