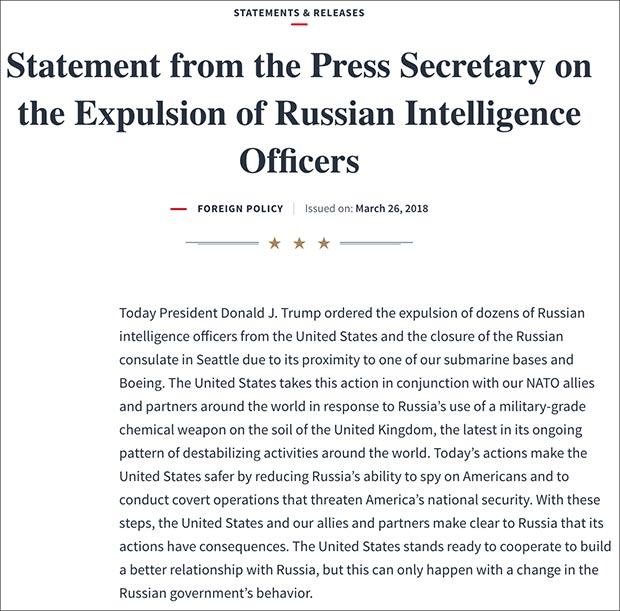 U.S. President Donald Trump has ordered 60 Russians diplomats to leave the country over Moscow’s alleged poisoning of an ex-spy in Britain.

Outlining the expulsion order Monday, administration officials said the Russians, including 12 alleged intelligence officers operating at the United Nations in New York, have seven days to leave the country with their families.

According to a statement from White House Press Secretary Sarah Huckabee Sanders, the Trump administration also ordered the closure of the Russian consulate in Seattle “due to its proximity to one of our submarine bases and Boeing.”

“The United States takes this action in conjunction with our NATO allies and partners around the world in response to Russia’s use of a military-grade chemical weapon on the soil of the United Kingdom, the latest in its ongoing pattern of destabilizing activities around the world,” Sanders said.

The statement further says that improved relations between both countries can “only happen with a change in the Russian government’s behavior.”

A senior administration official called Trump’s decision the largest ever mass expulsion of Russian or Soviet officials from the U.S.

The move was part of a coordinated effort which also saw U.S.-allies announce similar plans as well.

So far, countries such as Canada, Croatia, The Czech Republic, Denmark, Estonia, Finland, France, Germany, Hungary, Ireland, Italy, Latvia, Lithuania, the Netherlands, Poland, Romania, Slovakia, Spain and Sweden have either expelled diplomats or are expected to in the future.

Britain was the first to expel Russians from its country earlier this month when it kicked out 23 diplomats.

Speaking to reporters in the Oval Office on March 15, Trump said he believed Russia was responsible for the poisoning, which saw former spy Sergei V. Skirpal and his daughter Yulia Skirpal hospitalized in Salisbury.

“A very sad situation. It certainly looks like the Russians were behind it,” Trump said. “Something that should never, ever happen. And we’re taking it very seriously, as I think are many others.”

Russia has denied any involvement in the incident.