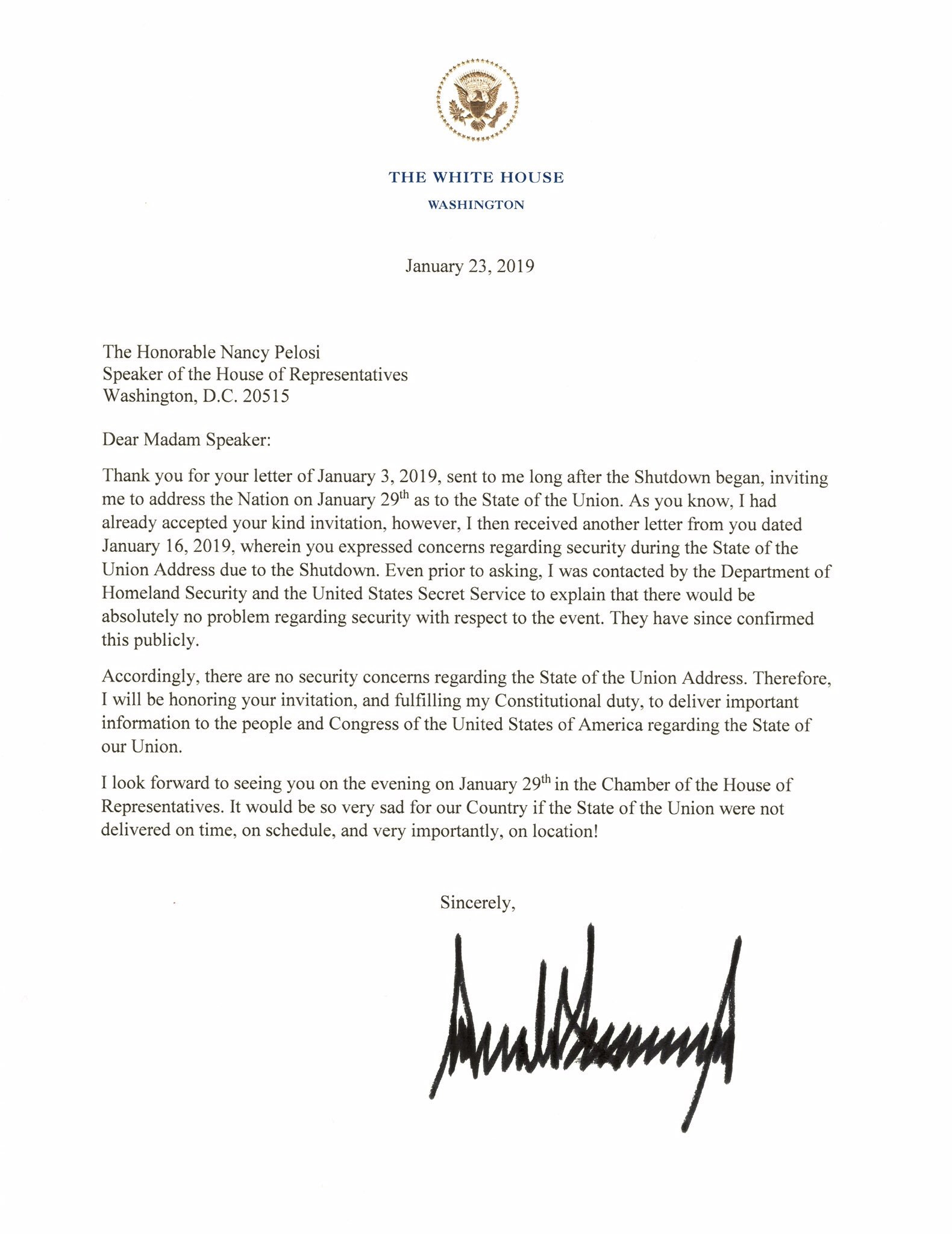 President Trump on Wednesday issued a letter to House Speaker Nancy Pelosi (D-Calif.) informing her it would be sad for the country if the 2019 State of the Union Address (SOTU) was not delivered on schedule and at the designated location – the House floor.

Weeks ago Pelosi had attempted to delay the SOTU citing “security concerns” amid the government shutdown, however Homeland Security and Secret Service reps confirmed no such concerns exist, as noted in the president’s letter.

“Thank you for your letter of January 3, 2019, sent to me long after the Shutdown began, inviting me to address the Nation on January 29th as to the State of the Union,” Trump began his letter to Pelosi.

“As you know, I had already accepted your kind invitation, however, I then received another letter from you dated January 16, 2019, wherein you expressed concerns regarding security during the State of the Union Address due to the Shutdown. Even prior to asking, I was contacted by the Department of Homeland Security and the United States Secret Service to explain that there would be absolutely no problem regarding security with respect to the event. They have since confirmed this publicly.”

President Trump’s letter to Speaker Pelosi on the State of the Union pic.twitter.com/B4QN9hDJnv

“I look forward to seeing you on the evening on January 29th in the Chamber of the House of Representatives,” the president concluded, adding, “It would be so very sad for our Country if the State of the Union were not delivered on time, on schedule, and very importantly, on Location!”

Speaker Pelosi last week reportedly denied White House staff access to the House chamber to complete a security walkthrough ahead of the SOTU.

Business Insider notes, “Ultimately, whether the State of the Union goes on as scheduled is up to Pelosi, not Trump. Trump cannot deliver a State of the Union address on the floor until the House and the Senate vote to convene a joint session of Congress.”

Trump’s letter is the latest in a series of back and forth attacks between him and the House Speaker amid Day 33 of the historic government shutdown, as the president fights to secure funding for a physical barrier along the southern US border with Mexico.

Last week Trump responded to Pelosi’s request to delay the SOTU by grounding a flight she and a congressional delegation had expected to take overseas aboard a military plane, citing the unresolved government shutdown.