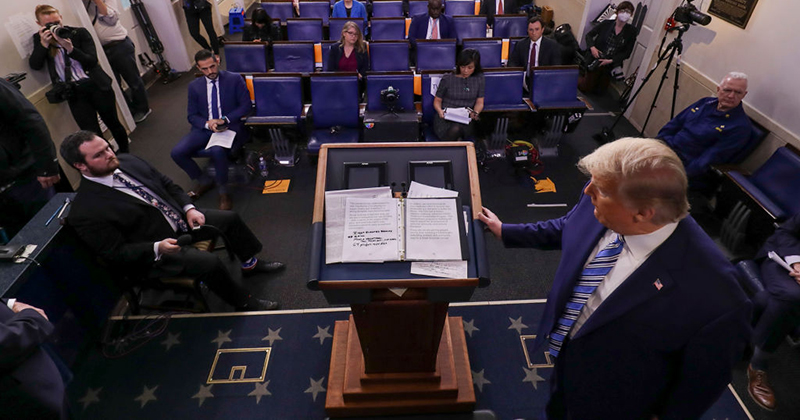 President Trump reacted to a CNN reporter’s jibing against praise for his administration’s handling of the coronavirus crisis by telling the press as a whole that they are the ones who were duped ‘for years’ by China, along with his predecessor, Barack Obama.

Trump played another montage of positive video clips praising the government’s handling of the outbreak, which triggered CNN reporter Jeremy Diamond into charging that Trump is focusing on ‘self-congratulation’, rather than focusing on the death toll.

“Those people have been just absolutely excoriated by some of the fake news, like you.” Trump continued, adding “You’re CNN, you’re fake news. And let me just tell you, they were excoriated by people like you that don’t know any better because you don’t have the brains you were born with.”

Trump noted that he is used to being personally attacked, but is losing patience with critics of his coronavirus task force.

“It’s not about me, nothing’s about me. You’re never going to treat me fairly, many of you, and I understand that,” he said, adding “I got here with the worst, most unfair press treatment they say in the history of the United States for a president.”

Diamond also questioned if Trump has been “duped” by Chinese President Xi Jinping.

“You know who was duped? You and the Obama administration was duped for years,” Trump responded, and further pointing to his early decision to ban travel from China.

“You people are so pathetic at CNN… That’s why your ratings are so bad: because you’re pathetic. Your ratings are terrible; you got to get back to real news,” Trump blasted.

Meanwhile, over at the aforementioned fake news headquarters, CNN’s Fareed Zakaria slammed Trump for blaming China for the outbreak, while actually acknowledging that China is to blame.

In a extreme display of cognitive dissonance, Zakaria stated that while China certainly has “engaged in a cover-up,” blaming the communist government for the spread of the virus doesn’t solve anything.

Zakaria argued that instead, the finger of blame should be pointed at Trump.

“China’s repressive regime has always controlled and manipulated information to serve its larger interests, but none of that changes the fact that Donald Trump was well aware of the potential dangers of the virus by late January at minimum and by mid-February at the latest.” Zakaria argued.

Zakaria further argued that the solution is globalism.

“Whatever China’s mistakes, missteps and deceptions, the fastest way to defeat this pandemic would be to build a broad international alliance.” the CNN host urged.