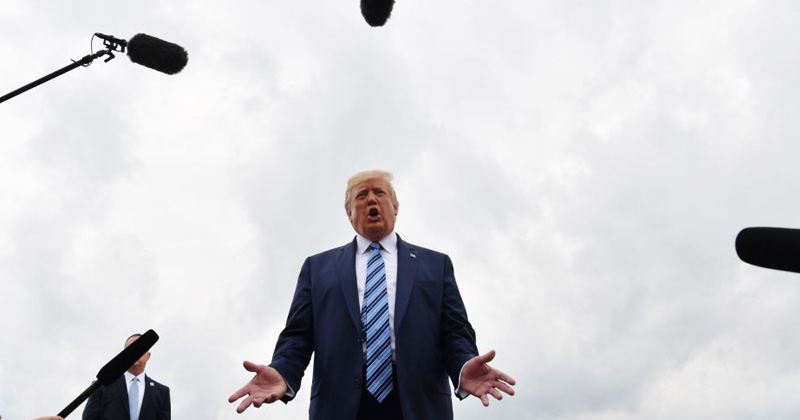 President Trump on Tuesday invited the press to do their jobs when he was asked whether he believed the Clintons may have been involved in the death of alleged sex trafficker Jeffrey Epstein, who died in prison Saturday under mysterious circumstances.

Trump responded to press inquiries by questioning why former President Bill Clinton lied about the amount of times he flew on the “Lolita Express,” Epstein’s private jet.

He also challenged the press to find out if Clinton did indeed visit the island, dubbed “Pedophile Island” by locals.

“You have to ask, did Bill Clinton go to the island. That’s the question,” Trump told reporters while on the runway at the Morristown, New Jersey airport. “If you find that out, you’re going to know a lot.”

Reporter: Do you really think the Clintons are involved in Jeffrey Epstein’s death?

President Trump: I have no idea. I know he was on his plane 27 times and he said he was on the plane 4 times. But when they checked the plane logs, Bill Clinton who was a very good friend of Epstein, he was on the plane about 27 or 28 times. So why did he say four times? And then the question you have to ask is did Bill Clinton go to the island? Because Epstein had an island that was not a good place, as I understand it. And I was never there, but you have to ask, did Bill Clinton go to the island. That’s the question. If you find that out, you’re going to know a lot. Thank you very much, everybody. Thank you.

Trump sparked a firestorm Saturday shortly after Epstein’s suicide was reported when he retweeted comedian Terrence K. Williams, who had a comedic take on the Clintons’ motive and Twitter’s attempt to tamp down the #Clintonbodycount hashtag.

Died of SUICIDE on 24/7 SUICIDE WATCH ? Yeah right! How does that happen#JefferyEpstein had information on Bill Clinton & now he’s dead

I see #TrumpBodyCount trending but we know who did this!