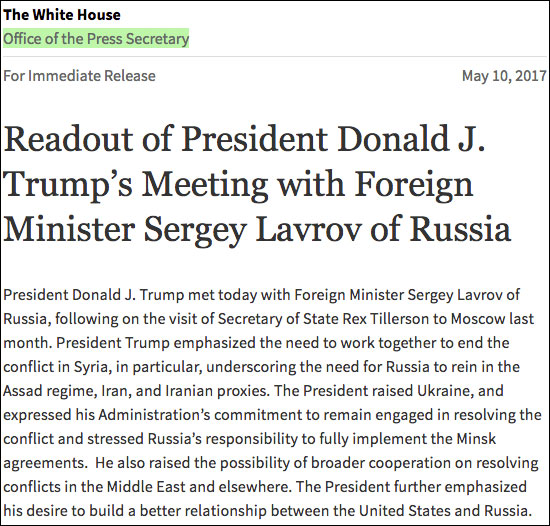 According to a readout of the Oval Office discussion, Trump, who “emphasized the need to work together to end the conflict in Syria,” urged Russia to control its Syrian ally as well as Iran and its proxies.

Trump also called for a “broader cooperation on resolving conflicts in the Middle East and elsewhere” and expressed his desire to mend the relationship between the two nuclear powers.

“The President further emphasized his desire to build a better relationship between the United States and Russia,” the readout states.

The meeting follows Trump’s May 2 phone call with Russian President Vladimir Putin in which the two leaders discussed the potential for a cease-fire in Syria.

Trump used the phone call to propose the establishment of “safe zones” in Syria one day prior to cease-fire talks, attended by representatives of both countries, in Kazakhstan. Russia presented a draft proposal to Syrian rebel groups and diplomats during the talks that similarly outlined the creation of “de-escalation zones.”

The White House meeting comes amid heightened tensions in the wake of the U.S. cruise missile attack last month on a Syrian air base allegedly connected to a chemical weapons attack.