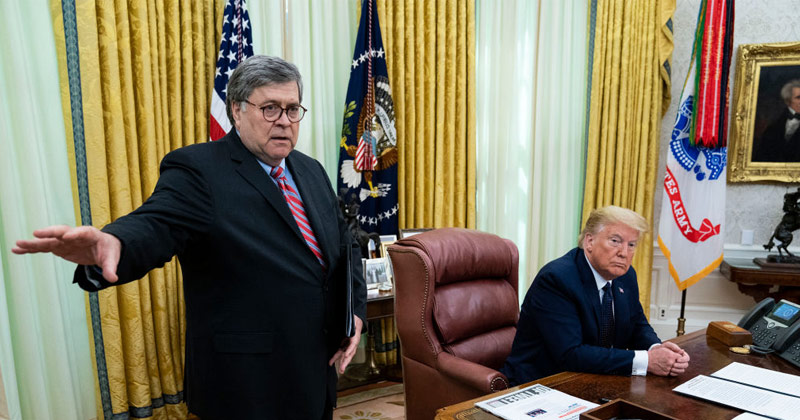 President Trump is peeling away the “liability shield” social media companies enjoy under Section 230 of the Communications Decency Act which was intended to protect Internet platforms from liability of third-party content as long as they act as neutral platforms for free speech and not as editors of content.

Joined by Attorney General William Barr, Trump also announced on Thursday that the Justice Dept. will work with state attorney generals to make sure they also enforce laws on deceptive business practices as they pertain to Big Tech.

“What they chose to promote or ignore is nothing short of political activism,” Trump told reporters. “This censorship is a threat to freedom itself – imagine if your phone company edited your text messages or blocked your phone calls.”

By “fact checking” and censoring content, social media platforms are acting as editors of content instead of neutral platforms which are protected from liability of third-party content under Section 230, both the president and attorney general stated.

According to AG Barr:

One of the things I’ve found that has the broadest bipartisan support these days is the feeling that this provision, Section 230, has been stretched way beyond its initial intention, and people feel that on both sides of the aisle. [Section 230] was adopted 25 years ago to protect the fledgling industry and its purpose was to allow web sites that were serving essentially as bulletin boards for diverse, third-party content to say that they’re not responsible for the content of that third-party information. It also encouraged these companies to take down things like child pornography, human trafficking advertising by stating ‘if you act to remove this kind of objectionable material, you won’t be liable for taking it down.’

Now it’s [Section 230] been completely stretched to allow what has become really behemoths who control a lot of the flow of information in our society to engage in censorship of that information and to act as editors and publishers of the material.

So when they put on their own content like ‘fact check’ on top of other people’s content, and when they curate their collection [of content available] and start censoring particular content, including in many cases under the direction of foreign governments like communist China, they become publishers and shouldn’t be entitled to the same kind of shield that was set up earlier [for neutral parties under Section 230].

The attorney general also believes the executive order will bring back Section 230’s original intent and that Big Tech companies gained dominance by acting as free speech platforms before pulling a “bait-and-switch.”

“These companies grew because they held themselves out as free public [neutral] forums where a variety of diverse voices can come on and be heard,” Barr added. “That’s how they grew. That’s how they attracted the eyeballs. That’s why people joined them.”

“But now because they’ve become this very powerful networks… they’ve now switched and are now using that market power to force particular viewpoints [as publishers and editors of content], and that’s wrong.”