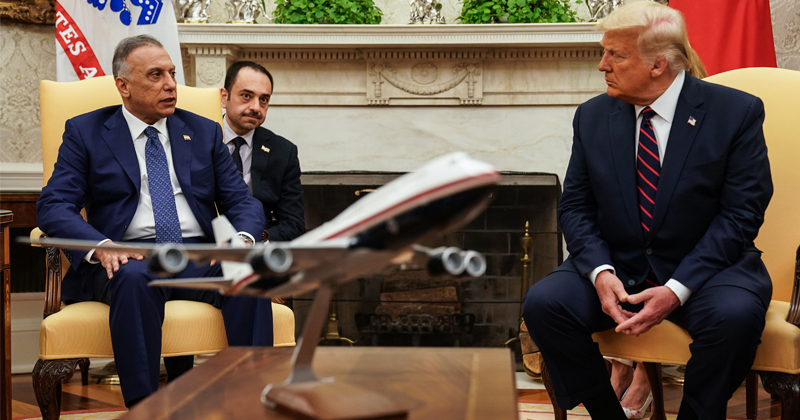 President Trump has again vowed that all US troops will soon be out of America’s second longest occupation in Iraq (behind the longest running war in Afghanistan).

But curiously, like in neighboring Syria, he tied concluding the US mission there directly to the possibility of oil and resource benefits for American companies:

“We look forward to the day when we don’t have to be there,” Trump said during an Oval Office meeting with Iraqi Prime Minister Mustafa al-Kadhimi.

Over the past months the president has been on record as desiring a troop withdraw as soon as possible, following tensions in January which nearly took the Pentagon to war against Iran-backed Shia militias in the country, in the wake of the US assassination of IRGC Quds Force chief Qassem Soleimani.

But the persistent key question remains as to the future presence of the some 5,000 US troops still in the country is the timetable.

When pressed by reporters on the issue, Trump turned to Secretary of State Mike Pompeo, who replied: “As soon as we can complete the mission. The president has made very clear he wants to get our forces down to the lowest level as quickly as we possibly can. That’s the mission he’s given us and we’re working with the Iraqis to achieve that.”

So it appears these twin objectives have emerged out of years of endless mission-creep and ambiguously defined “justifications” for staying there (a hallmark of the so-called ‘war on terror’ era: forever shifting objectives, or in some cases no objectives at all):

On the latter note, a handful of American companies have been named as central to Iraq energy deals, per the Associated Press:

On Wednesday, Energy Secretary Dan Brouillette announced energy agreements worth up to $8 billion between the Iraqi minsters of oil and electricity and five U.S. companies — Honeywell, Baker Hughes, GE, Stellar and Chevron. Brouillette said U.S. private investment will help Iraqi’s energy sector and stressed a need for Iraq to reduce its dependence on energy from Iran.

Meanwhile, across the border in Syria the US mission appears the same, given that for two years now US troops have been “securing the oil” – with deals for US entities to upgrade the facilities in Deir Ezzor in the works, namely the little known US-based firm Crescent Delta Energy.

At the UN this week, Syrian representative Bashar al-Jaafari slammed Washington for its ongoing brazen theft of the sovereign country’s oil and gas.