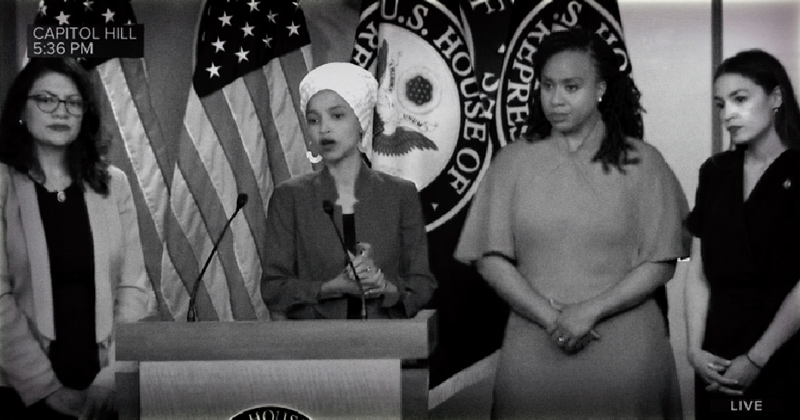 President Trump’s ongoing effort to force ‘moderate’ liberals to support the most extreme leftists – somewhat tarring the entire Democratic party with the same open-borders, anti-Israel, “America’s the worst” strategy – was turned up to ’11’ on the rhetoric scale today.

For more than a week, the president has been at the center of racism accusations after telling the group, made up of Reps. Alexandria Ocasio-Cortez (N.Y.), Ilhan Omar (Minn.), Rashida Tlaib (Mich.) and Ayanna Pressley (Mass.), to “go back” to their home countries.

And this morning he continued the attacks, calling the group of minority women a “racist group of troublemakers.”

“The ‘Squad’ is a very Racist group of troublemakers who are young, inexperienced, and not very smart.”

The “Squad” is a very Racist group of troublemakers who are young, inexperienced, and not very smart. They are pulling the once great Democrat Party far left, and were against humanitarian aid at the Border…And are now against ICE and Homeland Security. So bad for our Country!

Reading through the ‘squad’s statements, one can’t help but see Trump’s perspective, as Kurt Schlichter recent noted, the Democrats’ 2020 theme is that you are terrible and the party’s slogan will be “Americans suck, vote for us.”

“Thus enlightened, such people are single-minded in doing what is necessary to keep that job, which in their, and their perpetually-outraged sisters’ cases, is feeding the leftist audience what it craves. They live at the whim of the mob; for them, achievement consists of running fast enough to keep near the front of the crowd, news cycle to news cycle, appearing to be directing it. Since the howls and “likes” of the audience pay their bills, it is thus understandable that the news of every imagined American outrage, every shortcoming, and every awkward verbal stumble by a MAGA-hat wearing prole or cabinet secretary, is delivered by an Omar or a Tlaib with a haughty superiority and unalloyed joyfulness that is fingernails on a blackboard for the rest of us.”

We wonder just how many middle-Americans actually know (let alone care) about ‘the squad’?