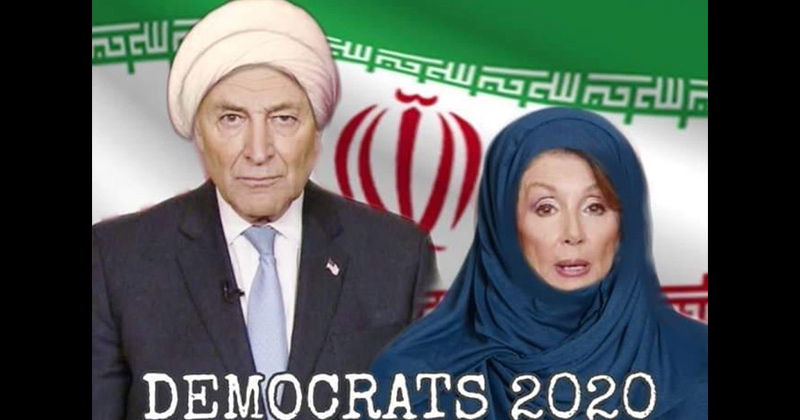 President Trump mocked top Democrat leaders Chuck Schumer and Nancy Pelosi on Monday by tweeting out an image showing them in Muslim headdresses.

“The corrupted Dems trying their best to come to the Ayatollah’s rescue,” the original tweet said, including the hashtag #NancyPelosiFakeNews.

The corrupted Dems trying their best to come to the Ayatollah's rescue.#NancyPelosiFakeNews pic.twitter.com/a0ksPHeXCy

Trump went on an anti-Pelosi Twitter spree, posting multiple links with the hashtag #NancyPelosiFakeNews, including the following video of the congresswoman dismissing Iranians who are protesting against their regime.

While the Iranian people are being killed by the mullahs in the protests, you are lying to the American people! The real people of Iran don't want the Democrats-backed terrorists. Shame on you for playing with the blood of Iranian people.
STOP #NancyPelosiFakeNews pic.twitter.com/FWKwuc9oOE

Just for a second assume there is no Dem nor Rep party. Look at the reality. Iranians want mullas gone. They’ve been massacred on Nov when main media were covering Trump impeachment. Be a human and stand for human right. #NancyPelosiFakeNews

People just now realizing how crazy and destructive Nancy is to America, better yet the world. I pity those that still support her. #NancyPelosiFakeNews

Meanwhile, in response to Iran shooting down a Ukrainian passenger jet, the Iranian people are chanting, “Death to Islamic Republic dictatorship” instead of “Death to America” and footage shows them refusing to walk on Israeli and American flags.

On Saturday, President Trump also sent out tweets showing his support for the Iranian protesters, saying, “The government of Iran must allow human rights groups to monitor and report facts from the ground on the ongoing protests by the Iranian people. There can not be another massacre of peaceful protesters, nor an internet shutdown. The world is watching.”

The government of Iran must allow human rights groups to monitor and report facts from the ground on the ongoing protests by the Iranian people. There can not be another massacre of peaceful protesters, nor an internet shutdown. The world is watching.

Of course, Twitter was flooded with liberals who were triggered by the image of Pelosi in a hijab and Schumer wearing a turban.

This retweet by Trump is racist. Please make a note hapless, neutered, propagandized, corporate media. I want to see this on every news channel tonight. https://t.co/dI9qIPapKt

Donald Trump retweeted a FAKE image of Nancy Pelosi and Chuck Schumer dressed in traditional Islamic attire in front of an Iranian flag.

Not an hour passes in Trump’s corrupt, worthless existence when he doesn’t find a way to scam America. Shameful.
https://t.co/s8zcfCl4lG

The president is an open racist and bigot. Everyone who votes for him this November is complicit in this racism and bigotry. No excuses. No exceptions. pic.twitter.com/m808dFRY2r

The #RacistInChief retweeted a badly-photoshopped image of Pelosi and Schumer in traditional Islamic clothing with the caption: “The corrupted Dems trying their best to come to the Ayatollah's rescue.”

This RT from Trump is beyond horrible, because it is racist against all Muslims, by putting Muslim head coverings on Schumer and Pelosi#ImpeachedForLife pic.twitter.com/c9mY3JKpEv

#BigotedPrig This is to insight #Hat e>>>>>>> #rump Retweets Fake Image of Pelosi in Hijab Standing in Front of Iranian Flag https://t.co/gNGzWoA00P via @thedailybeast

@GOP @realDonaldTrump What the HELL is wrong with DJT? Is he mentally Ill? Look at the crap he retweets below. Trump is supposed to be everyone's president not just those that are racist xenophobes #TrumpCrimeFamily #ImpeachTrump #TrumpLies #TrumpIsAWarCriminal #AmericanIdiot pic.twitter.com/3e7PAzw6oS