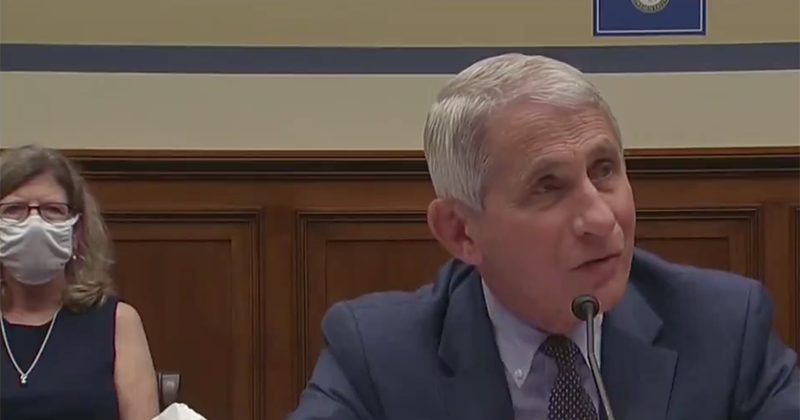 President Trump on Friday tweeted out a clip of Rep Jim Jordan grilling Dr Anthony Fauci on whether widespread Black Lives Matter protests should face any restrictions like those imposed on Churches in the name of stopping the spread of the coronavirus.

“Great job by Jim Jordan,” Trump said linking to an article from The Hill, “and also some very good statements by Tony Fauci.”

Great job by Jim Jordan, and also some very good statements by Tony Fauci. Big progress being made! https://t.co/8Oeca9H3yq

Trump also retweeted this clip from the article in which Fauci refused to say whether protests should be “limited” to stop the spread of the coronavirus:

But Democrats encourage people to riot and protest in the streets. pic.twitter.com/78Dyjkt6D6

Fauci had no issue with telling Churches to cancel the distribution of Communion, drastically limit attendance during services and much more.

Top medical TV producer Del Bigtree joins The Alex Jones show in-studio to break down the best chance the people have to fight the covid virus and beat the impending medical tyranny being pushed by the left.

As American Magazine reported in May:

Churches should “limit the number of people, so that you don’t have people in the pews right next to each other,” he said. Those gathered should “absolutely” wear masks, Dr. Fauci said.

“If the priest is on the altar, separated by 30, 40, 50 feet, you know, I wouldn’t think it was absolutely necessary to [use masks],” he said. “But the people who are within six, 10 feet of each other really need to.”

In addition, singing should be discouraged, Dr. Faucis said, because it dramatically increases the distance that droplets travel, adding to the possibility of spreading infection.

“When you sing, the amount of droplets and aerosol that come out is really, in some respects, scary,” he said.

Asked if he thinks Communion can be distributed safely, Dr. Fauci said “no,” especially in areas still getting the virus under control.

[…] “As many times as a priest can wash his hands, he gets to Communion, he puts it in somebody’s hand, they put it in their mouth…it’s that kind of close interaction that you don’t want when you’re in the middle of a deadly outbreak,” he said.

Churches can be bossed around but Black Lives Matter is sacred!