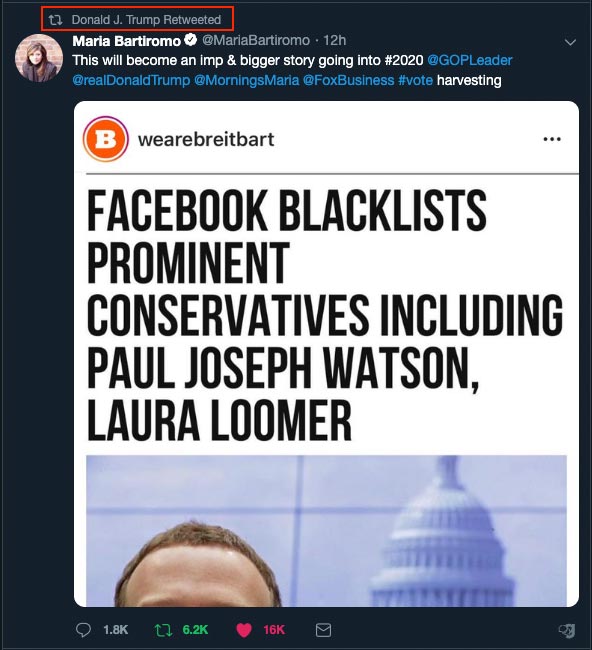 Earlier Friday, the president indicated he is aware of the over-the-top censorship efforts and is monitoring the situation closely.

I am continuing to monitor the censorship of AMERICAN CITIZENS on social media platforms. This is the United States of America — and we have what’s known as FREEDOM OF SPEECH! We are monitoring and watching, closely!!

“This will become an imp & bigger story going into #2020 ⁦@GOPLeader⁩ ⁦@realDonaldTrump⁩ ⁦@MorningsMaria⁩ ⁦@FoxBusiness⁩ #vote harvesting,” Bartiromo stated in her tweet.

Bartiromo’s use of the term “vote harvesting” is a reference to Big Tech meddling in the upcoming 2020 election, especially given that Infowars played a huge role in President Trump’s 2016 victory, from our “Bill Clinton is a rapist” contest which plagued Hillary’s presidential campaign, to our stories based on Wikileaks documents detailing “spirit cooking” and more.

Watson, former editor-at-large of Infowars and founder of Summit.news, was appreciative of the president’s show of support.

I appreciate President Trump tweeting about me. Hopefully this will speed up executive action on regulating Big Tech.

On Thursday, Facebook and Instagram announced they were eliminating the accounts of Infowars, Paul Joseph Watson and other conservative figures including Laura Loomer and Milo Yiannopoulos, deeming them “dangerous.”

“We’ve always banned individuals or organizations that promote or engage in violence and hate, regardless of ideology. The process for evaluating potential violators is extensive, and it is what led us to our decision to remove these accounts today,” a statement from Facebook said.

For the most part Trump seems to be aware of the censorship wave threatening his most ardent supporters. He’s brought the issue up at several 2020 campaign rallies, and campaign manager Brad Parscale has also called out the leftist big tech bias against conservatives.

Social Media Giants are silencing millions of people. Can’t do this even if it means we must continue to hear Fake News like CNN, whose ratings have suffered gravely. People have to figure out what is real, and what is not, without censorship!

The president’s continued support of Infowars is evident from his tweets. Now it remains to be seen exactly what actions he’ll take to preserve the integrity of the 2020 election.