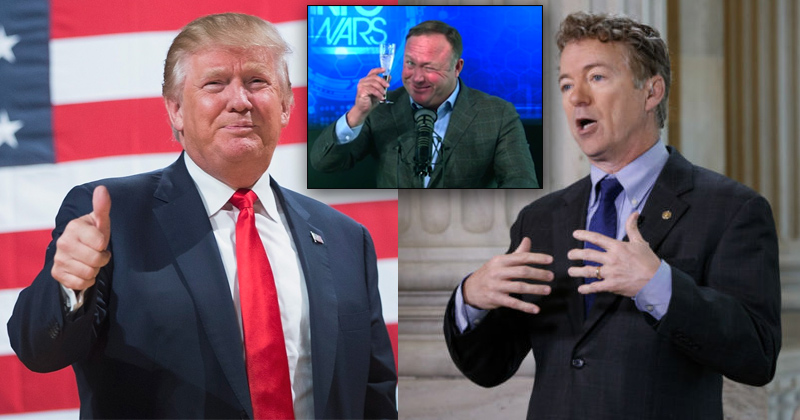 President Donald Trump shot off a tweet to Kentucky Senator Rand Paul in reference to healthcare mere hours after the congressman appeared on The Alex Jones Show.

Th House leadership plan is Obamacare Lite. It will not pass. Conservarives are not going to take it. #FullRepeal

“I think there are enough votes [in Congress]… to stop this thing, and then our hope is we’ll vote on clean repeal. Let’s just repeal Obamacare and forget trying to start new government programs,” Sen. Paul said.

Responding to questions whether Trump may be unaware of the potential Obamacare-lite disaster, Paul stated he spoke with the president Monday who expressed interest in negotiating the bills.

“I talked to him yesterday. He called me up and we had a great conversation. He and I are getting along just well, which is very fine, and in that conversation he said he wanted to hear other ideas, and that really he understands the legislative process, and the Republican party is not monolithic – there are conservatives there are moderates there are big government Republicans and there’s the establishment – and he more than anybody knows he needs to fight the establishment and the status quo. And he understands that there are a lot of people whispering in his ear from Washington that have been here forever that really aren’t intent much on repealing the whole thing; they want to replace it with another program. But I think he’s open to listening. He asked for my ideas on this and I think he truly did want to hear from some members that aren’t happy with what’s coming forward.”

“We have two different bills, one is the repeal… and then the second thing we are going to do is a replacement bill, we’ve already done it, about a month ago it’s called S.222 and in it there’s something really exciting. And I’ve met a lot of your listeners, a lot of people are small business owners independent minded people who work for themselves and my bill allows them to join in association.”

Within hours of Paul discussing his bills with Alex Jones and various other media outlets, the president tweeted he was confident Sen. Paul would “come along with the new and great health care program because he knows Obamacare is a disaster.”

I feel sure that my friend @RandPaul will come along with the new and great health care program because he knows Obamacare is a disaster!