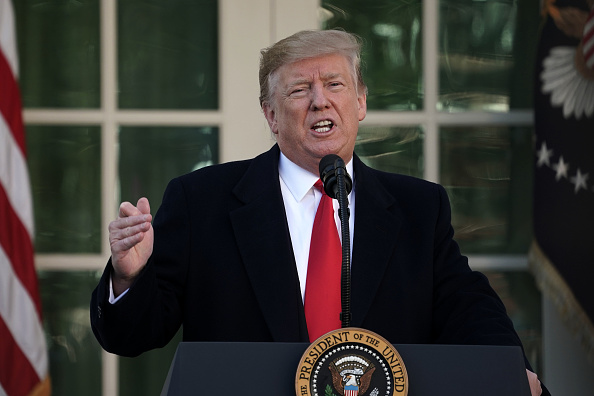 Friday’s agreement between President Trump and Congressional Democrats to reopen the government for three weeks has been celebrated by gloating Democrats, and panned by Trump’s base. The temporary deal will pay roughly 800,000 federal employees who were set to miss their second paychecks on Friday, while negotiations over Trump’s wall will occur over the next 21 days. Federal workers will receive backpay as part of the deal.

Fending off a wave of criticism from the right, Trump defended his decision over Twitter – tweeting that the deal was “taking care of millions of people who were getting badly hurt by the Shutdown,” and that “in 21 days, if no deal is done, it’s off to the races!” – implying that he would declare a national emergency and divert federal funds towards building the wall if an agreement can’t be reached.

In 21 days President @realDonaldTrump is moving forward building the wall with or without the Democrats. The only outstanding question is whether the Democrats want something or nothing https://t.co/dMaDfBOIuT

On Saturday Trump tweeted: “21 days goes very quickly. Negotiations with Democrats will start immediately. Will not be easy to make a deal, both parties very dug in,” adding “The case for National Security has been greatly enhanced by what has been happening at the Border & through dialogue. We will build the Wall!”

21 days goes very quickly. Negotiations with Democrats will start immediately. Will not be easy to make a deal, both parties very dug in. The case for National Security has been greatly enhanced by what has been happening at the Border & through dialogue. We will build the Wall!

We have turned away, at great expense, two major Caravans, but a big one has now formed and is coming. At least 8000 people! If we had a powerful Wall, they wouldn’t even try to make the long and dangerous journey. Build the Wall and Crime will Fall!

Perhaps Trump should point out that if civil war breaks out in Venezuela, millions of refugees will also need a place to call home. Perhaps Soros would help out with Caribbean NGO taxis to Florida.

“We absolutely need a physical barrier or Wall, whatever you want to call it. The President yesterday laid all that out. We need to do it all, including the Wall. I provided the same information to the previous administration, & it was ignored.” Mark Morgan, Border Chief for “O”!

Trump faced intense backlash from his base after “caving” on Friday – perhaps most prominently from conservative pundit Ann Coulter, who savaged the President over Twitter – and then on “Real Time With Bill Maher” Friday night.

Good news for George Herbert Walker Bush: As of today, he is no longer the biggest wimp ever to serve as President of the United States.

“I promise you the country would be run much better if I had a veto over what Donald Trump is doing. It’s crazy that I expect a president to keep the promise he made every day for 18 months,” Coulter told Maher.

Tough day for Mammoth. It's now the 2nd biggest cave in the world. #trumpcaved pic.twitter.com/X9AgcA2XWP

Others defended Trump, suggesting that Trump has things under control:

He didn’t cave, it’s a strategy. He's going to sign a temp bill that will fund the gov for 2-3 weeks. That allows him to make the State of the Union address. When we still don't have the wall funding, he will declare a state of emergency for the wall.

He set up the board.

1. State of Union (something is planned)
2. Failure to negotiate will be Nancy & Chuck
3. He stepped back, let everyone off hook and looks like benevolent father

This is a classic.

Roger Stone joins Alex Jones live over the phone to issue an emergency message to President Trump as his lines of communication are cut off and the mainstream media ignores his actual statements regarding his indictment.