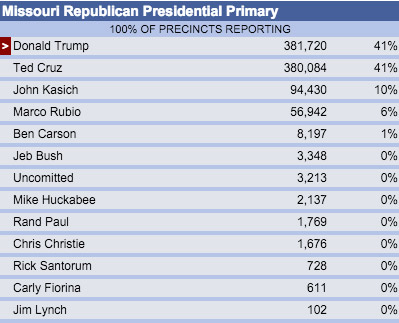 GOP presidential frontrunner Donald Trump defeated his opponents in four out of five states where election primaries were held Tuesday.

Thank you Marco, I agree! pic.twitter.com/PTfFzFno9p

In his concession speech, Rubio appeared to take a parting jab at Trump.

Trump continued his march to victory in North Carolina and Illinois, but lost the winner-take-all state of Ohio to the state’s governor John Kasich, handing him 66 delegates and the momentum to stay in the race.

During a press conference at the billionaire’s Mar-a-Lago resort in Palm Beach, FL, following wins in three states, Trump called for Republican party unity and said he’d already had a “tremendous” phone call with House Speaker Paul Ryan, as well as a “great conversation” with Senate Majority Leader Mitch McConnell.

“The fact is we have to bring our party together. We have something happening that actually makes the Republican party probably the biggest political story anywhere in the world,” Trump said.

“Millions of people are coming in to vote,” he said. “We have a great opportunity.”

Late into the night, it was a close race in Missouri between Trump and Texas Senator Ted Cruz, but in a down to the wire, neck and neck finish the hotel mogul was able to clinch the victory, KSPR reports.

All the Missouri votes are in.
Clinton wins.
Trump wins.
But margin is less than 1% so likely recount required.

Kansas City Fox affiliate WDAF also called the race in Trump’s favor, although noted the losing candidate could request a recount because of the close 1 percent margin. 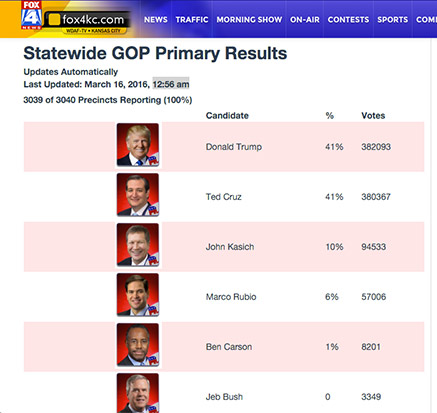 Much earlier in the day, Trump also won 9 delegates in the Northern Mariana Islands.

In the Democrat race, Hillary Clinton defeated Bernie Sanders in the key states of Ohio and Florida, and also scored victories in North Carolina and Illinois. 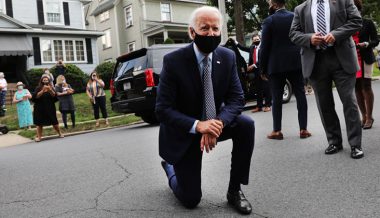