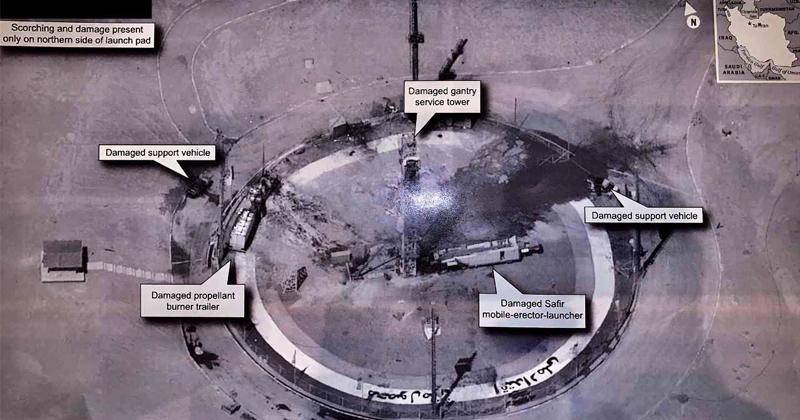 Earlier, satellite photos by private Earth-imaging companies showed what appeared to be the remnants of a space rocket at an Iranian spaceport following a failed launch.

US President Donald Trump has tweeted Iran his “best wishes and good luck in determining what happened” to the Iranian space rocket which was destroyed before lift-off on Thursday, deepening the mystery into why the launch failed.

The United States of America was not involved in the catastrophic accident during final launch preparations for the Safir SLV Launch at Semnan Launch Site One in Iran. I wish Iran best wishes and good luck in determining what happened at Site One. pic.twitter.com/z0iDj2L0Y3


Trump claimed the US was “not involved in the catastrophic accident during final launch preparations.”

Given Washington’s repeated criticism of Iran’s peaceful space program, it’s not immediately clear if the president was being sarcastic.

On Thursday, an anonymous Iranian official confirmed to Reuters that a rocket launch at the Imam Khomeini Spaceport in northern Iran had failed, citing “some technical issues” which caused the rocket to explode.

Soon after the incident, satellite imaging companies released images of the destroyed rocket, still standing at its erector platform, as smoke billowed from the site. Analysts who observed the satellite images told US media that the remains of the rocket seemed to indicate that the launch failure may have been caused by a problem during the fuelling stage, or by an electrical short.

Iranian officials have not commented on whether they suspected foul play in Thursday’s incident. However, after the failure of two other satellite launches earlier this year, Iranian Foreign Minister Mohammad Javad Zarif said Tehran would not rule out that the US could be invovled in attempts to deliberately sabotage Iran’s space program.

The US, its European allies, Saudi Arabia and Israel have repeatedly complained about Iran’s rocketry and satellite programs, alleging that they posed a threat to regional security and were a violation of the UN Security Council Resolution adopting the 2015 Iran nuclear deal. Tehran says its space program has nothing to do with the nuclear deal, and that its rocket and missile endeavors were not illegal under the nuclear deal, since they were not designed to carry nuclear weapons.

Iran is one of just a handful of countries in the world with an active domestic space program, and has successfully launched multiple satellites into orbit over the last decade, despite extremely modest financing. The Iranian Space Agency was formally established in 2004.

Iran is also one of the founding members of the UN Committee on the Peaceful Uses of Outer Space, a treaty whose future President Trump has recently put in question with his plans to establish a Space Force – a new, sixth branch of the US armed forces.

A citizen of Salt Lake City, Utah, calls in to The Alex Jones Show to expose the massive UN conference taking place in her backyard.