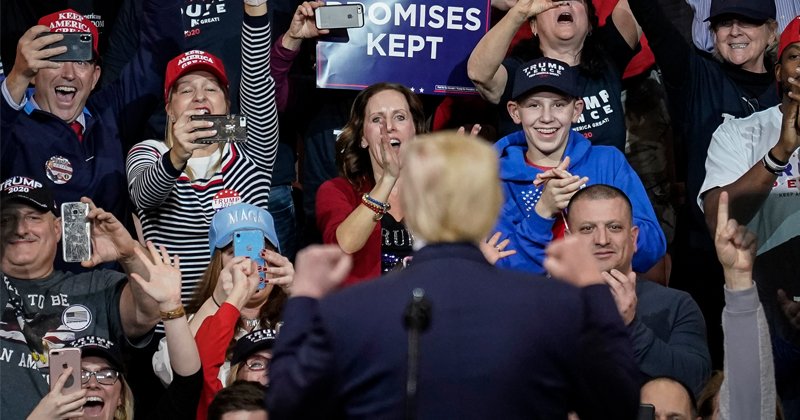 Donald Trump won the Republican New Hampshire primary on Tuesday night — a rather unremarkable feat given his lack of any real competition.

You don’t think Democrats are worried?

The final numbers aren’t in yet, but it’s clear Trump won more than 100,000 votes among Republican and independent voters. That’s more than double the roughly 49,000 that President Barack Obama won among Democratic voters in New Hampshire’s 2012 primary when he ran uncontested for reelection, and it’s at least 35,000 votes more than Bernie Sanders, who is currently leading the Democratic field.

There are important differences, to be sure, but Trump’s significant gains prove he is still generating an unprecedented amount of enthusiasm.

It’s hard to vote for someone who is a sure-fire, 100 percent certain winner. Just ask Obama. But Republicans want to vote for Trump. That’s what real enthusiasm looks like.

No matter how electable the Democrats’ nominee is, it will be difficult for the Democratic Party to replicate the populist fervor Trump’s campaign represents. The Democratic nominee will also have to compete against Trump’s economic advantage. This won’t be easy: Two-thirds of voters expect Trump to be reelected, according to a new poll from Monmouth University, and 42% of those voters admitted Trump deserves a second term.

What’s more: The blue wave Democrats have hoped for has yet to appear. Voter turnout in the Iowa and New Hampshire primaries fell far short of what Democrats had anticipated. Meanwhile, Trump’s rallies in both states were packed with lines out the door.

“Populist fervor,” “celebrity,” “hero worship” — call it what you want, Trump is demonstrating he has a quality that most politicians would kill to possess: voter loyalty. It means that whether it’s good weather, bad weather or there are acts of god or what have you, voters are going to show up at the polls in November to vote for Trump — and show up in large numbers.

Trump was apparently disappointed he had to share the national attention with Democrats.

“The Fake News Media is looking hard for the Big Democrat Story, but there is nothing too fabulous,” he wrote in a tweet, after weighing in on half a dozen storylines of the Democratic race. “Wouldn’t a big story be that I got more New Hampshire Primary Votes than any incumbent president, in either party, in the history of that Great State? Not an insignificant fact!”

In another tweet, Trump needled one of his main nemeses, Tom Steyer, who bought tens of millions of dollars in ads urging the Senate to impeach the president.

Impeachment King Steyer (how did that work out?) spent 200 Million Dollars and got less than 1% of the vote in Iowa, and only 3% of the Vote in New Hampshire. Could it be that something is just plain missing? Not easy to do what I did, is it?


It should be noted that the entire Democratic field in New Hampshire is getting about twice the vote of the president. No doubt the Democrats generated their own excitement for the primary. But Donald Trump only lost New Hampshire by 3,000 votes in 2016 and is no doubt eyeing the state and its four electoral votes to flip it in November.