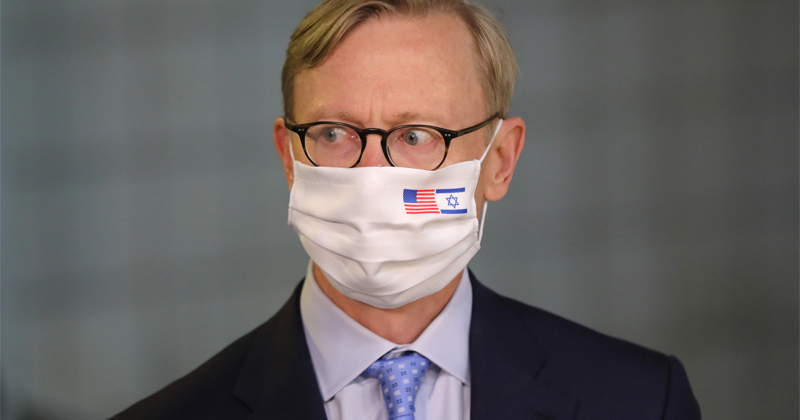 During a day where there have been “a lot of crosscurrents” unfolding as the world awaits word from a 5pm negotiating session between the White House and Congressional Dems, Brian Hook, the Trump Administration’s special envoy to Iran, has quietly bowed out.

Here’s more on that from Reuters, which explains that the timing of Hook’s decision is notable, given next week’s UN SC vote on an Iranian arms embargo:

Hook’s departure comes as the United Nations Security Council prepares to vote next week on a U.S. bid to extend an international arms embargo on Iran. Some diplomats have said the measure lacks support.

Pompeo did not give a reason for Hook’s decision to leave. It was not immediately clear when Hook would finish, but the announcement comes at a crucial time for U.S. diplomacy on Iran.

If the United States is unsuccessful in extending the arms embargo on Iran, it has threatened to trigger a return of all U.N. sanctions under a process – known as snapback – agreed in the 2015 nuclear deal between Tehran and world powers.

The departure of Hook, who briefly spoke with the NYT about his decision to leave, likely signals the end of any chance of a diplomatic resolution to the situation in Iran, even if Hook’s brand of “neocon-lite” will be more or less left intact by his successor, Elliott Abrams, a former Bush I official and rabid neocon who was Trump’s point man on Venezuela.

Now, with the attempts to overthrow Maduro now officially on the backburner, Abrams will be the special envoy to both Venezuela and Iran.

Secretary of State Mike Pompeo didn’t list a reason for leaving in a statement announcing the move.


Given the timing – as we mentioned above – it’s reasonable to suspect that Hook is being pushed out by the administration, which is probably less than happy with the fact that next week’s vote to extend the Iranian arms embargo is no longer looking like a sure thing. If that vote fails, the US has promised to use its USNC heft (the perks of permanent membership) to reinstate full UN economic sanctions on Iran by invoking a process known as the “snapback”, a provision of the JCPOA.

Here’s more from Hook via the NYT:

“There is never a good time to leave,” Mr. Hook said in an interview, because the confrontation with Iran had become a perpetual series of provocations, responses and efforts to change Tehran’s behavior.

“Sometimes it’s the journey and sometimes it’s the destination,’’ Mr. Hook said in the interview on Wednesday. “In the case of our Iran strategy, it’s both. We would like a new deal with the regime. But in the meantime, our pressure has collapsed their finances.”

“By almost every metric, the regime and its terrorist proxies are weaker than three and a half years ago,” he added. “Deal or no deal, we have been very successful.”

Hook’s departure is significant because he was one of the few “survivors” in the administration, and the fact that Abrams will now assume more power just means that President Trump is delegating more of his foreign policy agenda to a committed (and some might say dangerous) neo-con.