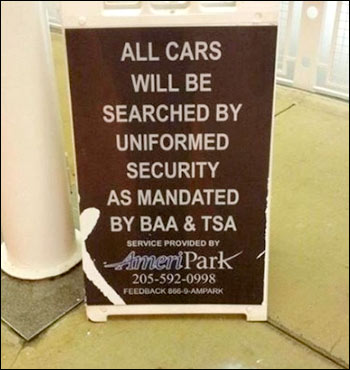 Back in July the TSA posted to its blog that it does not search vehicles parked at airports. The claim is technically true. TSA employees do not search cars directly. Instead, they mandate violations of the Fourth Amendment by proxy.

In lieu of a friendly TSA agent donning blue latex gloves searching cars, “uniformed security” accomplish the task, according to a sign at the Birmingham-Shuttlesworth International Airport. The photo was posted on Facebook.

Around the same time the TSA offered its deceptive explanation, a news station in Rochester, New York, reported that the TSA had ordered parking valets to search vehicles without notice or owner permission. The valet company left a notice announcing it had illegally searched vehicles.

In response to the news report, the TSA said valet parked cars often remain curbside at the airport for 30 minutes or more. Because of this they pose a threat.

None of this, of course, should come as a surprise. The TSA announced back in 2011 that it planned to move from airport gates to other modes of transportation.

In addition to the now familiar pat-down mimicking a sexual molestation, “screenings” at train and bus terminals include roaming paramilitary teams, fondly known as VIPR, that march up and down platforms with bomb-sniffing dogs. Offering a lame excuse for this intimidating Gestapo-like behavior, the TSA explained it wants to prevent another Madrid train bombing.

It turns out the Madrid bombing was an inside job. In 2008, we reported that the people who provided the explosives for the attack were government informants. One of the informants was caught with the telephone number of the head of Tedax, the Spanish Civil Guard bomb squad.

Curbside violations of the Fourth Amendment will not stop terrorist bombings, not that such a scenario is probable in the United States. Since 9/11, the country has not experienced a single terrorist bombing. The FBI, on the other hand, has gone into overdrive to convince us that there are malevolent jihadists among us who hate us for our freedom. It invariably turns out these supposed terrorists are in fact FBI patsies stage handled by informants and agent provocateurs. They are often provided with inert bombs that act as stage props for a hysterical propaganda campaign aimed directly and the Constitution and the Bill of Rights.

Valet searches and intimidating signs at airports are designed to remind you that as an American you now live in a police state. Endless terror drills conducted jointly by the military and state local officialdom underscore this fact and also keep the phony terror threat alive.