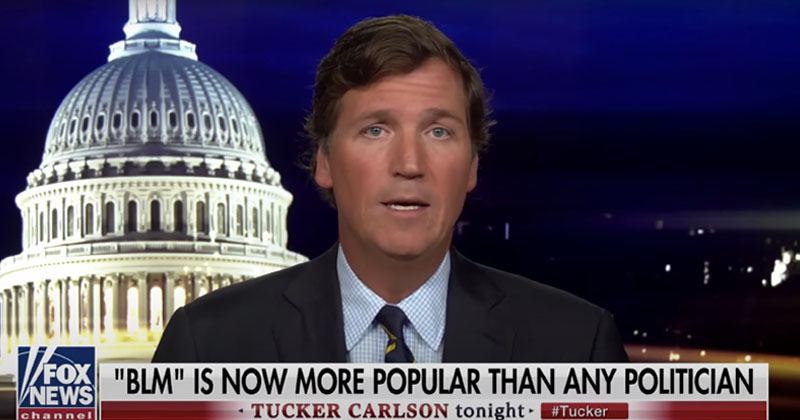 Fox News host Tucker Carlson warned Americans about the rising power of the Black Lives Matter organization, noting it can no longer be criticized without serious social or personal consequences.

“But that’s deception by understatement. Black Lives Matter is not a collection of marchers with signs. It’s not a conventional political lobby like Planned Parenthood or the NRA…It is working to remake the country and then to control it. It’s a political party.”

Carlson went on to describe how the pandering and virtue-signaling by political and corporate leaders has positioned BLM to be the most powerful political party in America.

“As of tonight, Black Lives Matter may be the single most powerful party in the United States,” Carlson continued. “Nobody says that out loud but politicians understand it perfectly well. If nothing else, they understand power — they can smell it at great distances. That is why they are lining up to bow before Black Lives Matter.”

So powerful in fact, that even Republicans are kowtowing to the BLM social justice sham.

“Republican leaders brag about their strong conservative convictions, but mostly they just want to be on the winning team, whatever that is,” Carlson said. “That is why they pause before offending China. It’s why when Black Lives Matter tells them to take a knee, they do.”

“It’s all pretty strange when you think about it. If the leaders of Black Lives Matter are political actors, and they are, then by definition you are allowed to have any opinion you want to have about them.”

But because Black Lives Matter has become immensely powerful and influential with the support of the Washington and Hollywood establishment, criticizing the organization is now dangerous and is considered “hate speech” in the eyes of the left.

“Black Lives Matter now enjoys almost complete immunity from criticism,” Carlson said. “This is unprecedented for an American political movement but Black Lives Matter is more powerful than that. It has singlehandedly revised our moral framework…”

“Affirming the fundamental equality of all people is now considered hate speech,” he added. “You can be fired for saying it. Again, many people have been. This is a dangerous moment.”

Harrison loses his cool after watching the video of Lisa Alexander, who lost everything after asking a BLM protestor a question.