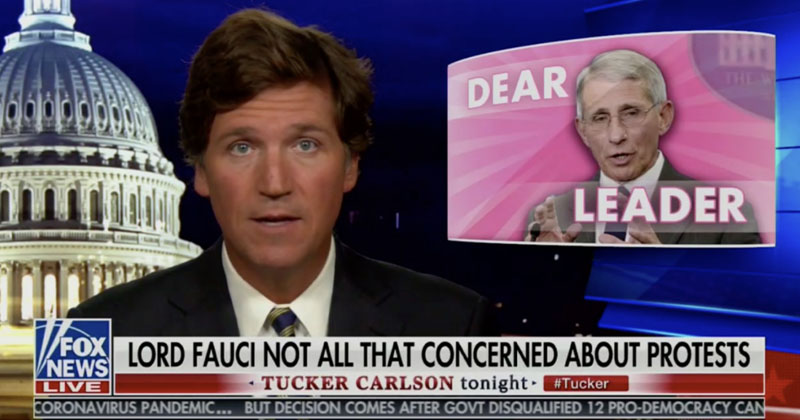 During Carlson’s segment, Carlson showed a clip of Rep. Jim Jordan (R-Ohio) sparring with Fauci over the BLM protests, saying he “won’t opine on as long as it doesn’t offend the popular and fashionable left.”

In the clip, Jordan attempted to get Fauci to explain how the BLM protests don’t heighten the risk of spreading COVID-19, but the NIH director dodged the question.

“I just want an answer to the question, do the protests increase the spread of the virus?” Jordan pressed.

“I can tell you that crowds are known, particularly when you don’t have a mask, to increase the acquisition and transmission, no matter what the crowd is,” Fauci responded.

Carlson pointed out that Fauci has had something to say about nearly every conceivable subject – from baseball to “hooking up” – regarding the coronavirus, so it’s unusual to see him refuse to elaborate about the BLM protests.

“Fauci is 79, but maybe if he had like 22-year-old kids who were trying to make their way in this world in an economy that is headed down the tubes, thanks largely to his recommendations, he would feel differently,” Carlson said.

“It’s not merely an inconvenience when your economy collapses. It’s the end of the American dream. That’s not a small thing. Maybe it’s worth it. Maybe it’s not, but if it is, then you probably shouldn’t take a pass on the question ‘are protests are riots OK?’ Unless you’re a total fraud, like a complete fraud.”

“What a fraud this guy is,” he added.

From suggestion, to recommendation, to guideline, to order, to force. Now Fauci suggests you cover your eyes. Dutch & Swedes say NO, and they have beat this.