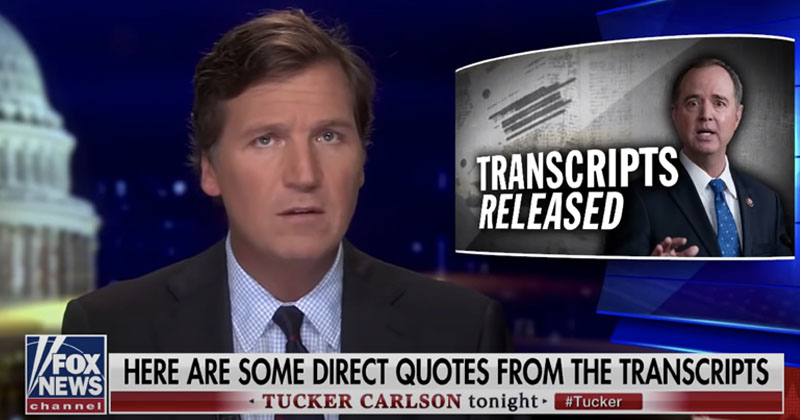 Fox News host Tucker Carlson called on Rep. Adam Schiff (D-Calif.) to resign after 57 closed-door Congressional transcripts were finally released, showing once and for all that no evidence of collusion or conspiracy between Russia and Donald Trump exists.

Tucker pointed out on Friday that not only did Schiff claim evidence existed of a conspiracy between Russia and Trump, but that he had seen it firsthand.

“Adam Schiff is a sociopath. He will do or say anything to achieve power. He is unfit to hold office. He should resign,” Carlson said. “And not just Adam Schiff. The entire apparatus of official Washington has been exposed by these transcripts, as well as by the documents just released in the Michael Flynn case.”

“It was all lies, literally all of it, even the core claims about hacking that formed the basis of the entire story and the investigation that followed.”

Carlson went on to blame Republicans for failing to expose Schiff’s obvious lies sooner given they had controlled Congress and its many committees up until 2019.

“At the time, Republicans controlled both houses of Congress and every single committee. They had the power to expose this hoax and to shut it down. But they did not. We can only speculate why. Maybe they were too cowardly to tell the truth. Or maybe, deep down, a lot of them agreed with the aims of all of this.”

“Either way, it’ll be very interesting to hear Sen. Lindsey Graham of South Carolina, Senate Majority Leader Mitch McConnell of Kentucky, Sen. Richard Burr of North Carolina and so many other useless Senate Republicans – the total phonies who tell you they’re representing you but don’t – explain why they didn’t really do anything to stop the derailment of America while it was in progress.”