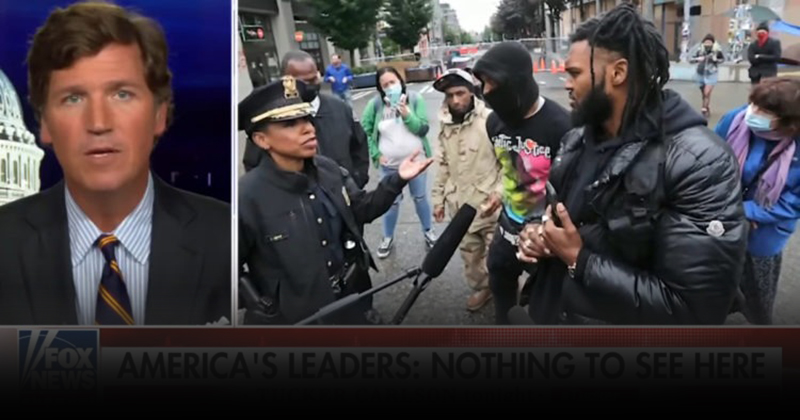 Discussing the newly founded Capitol Hill Autonomous Zone in what was formerly downtown Seattle, Fox News host Tucker Carlson explained that the first thing the former anarchists did upon founding their new nation was immediately develop strong walls around its borders, followed by armed border guards.

“The first thing it did was establish rigid national borders,” said Carlson. “They built a wall around the place, just like Donald Trump once said he would do. Their wall is made from wooden barricades.”

Carlson continued, “A sign at the entrance to the country warns, ‘You are now leaving the USA.’ And then there are armed border guards, not technically ICE agents but close enough, who question everyone seeking entry. Countries have borders, and the founders of CHAZ understood that. They don’t want the place flooded with illegals, and by illegals we mean the citizens of Seattle.”

The Tucker Carlson Tonight host went on to explain how the leaders of CHAZ have embraced realistic policy positions to protect the safety and economic well being of its citizens.

“You can’t let just anyone into your country. An uncontrolled flood of immigrants would tank the economy, and the people of CHAZ know that,” said Carlson. “They’re not libertarians, they don’t work for the Chamber of Commerce, they’re not giving you some speech about how immigration makes you richer, they’re realists: They want to make this work for the safety of their people.”

Carlson went on to explain that the newly founded nation, lacking a skilled workforce or national resources, have now taken to “extortion through violence,” said Carlson. “Just like the Conquistadors.”

The Capitol Hill Autonomous Zone is currently controlled by roving warlord and aspiring hip hop artist Raz Simone, who has established a private police force that is quick to dole out beatings to opponents of the regime.

National File covered the reports that an armed police force is extorting the local population in CHAZ. A man named Raz Simone, who has beencalled a warlord online, currently provides a sort of police force in the area, and was seen on video beating another man for tagging over graffiti that was already owned.

The next day, the Seattle police chief confirmed that reports of extortion exist in a video message sent to officers, and subsequently to the public after it was leaked.