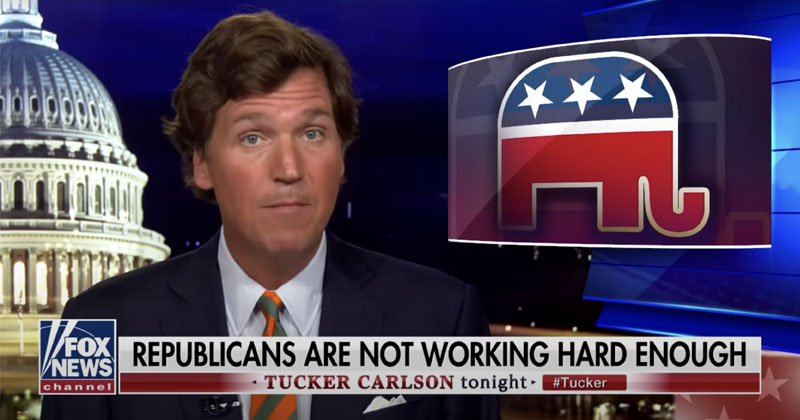 Fox News host Tucker Carlson eviscerated the weak Republican Party establishment for not working hard enough for the American people, especially during this unique time of crisis in America when party leadership is necessary.

In his Tuesday monologue on “Tucker Carlson Tonight,” Carlson all but declared war on the RINOs and spineless Republicans lacking fortitude to take on the far-left cancel culture mob, and insisted that voters must vote for Republicans who actually protect them.

“The fact is, the Republican Party is the only institution still open to the rest of us — to Americans who want to live as they did just fifteen years ago: quietly, productively, without being harassed and harangued by self-righteous lunatics who mean them harm,” Carlson said. “If you want to be left alone to do your job and raise your family in America, you are going to need a protector. For that, we’ll need a very different kind of Republican Party.”

“Keep in mind that we’re getting a new party, either way. Even now, vultures wait just off stage to swoop in and claim the GOP for themselves once Donald Trump is gone. Former governor Nikki Haley tops that list, but there are many others. The moment Trump leaves, they will attack him. They’ll tell you that the Republicans lost power because they were mean and intolerant, like Donald Trump. If you listen carefully, you can hear them say that now. It’s a lie.”

“Republicans are failing for a much more obvious reason: they haven’t done much that’s worth doing,” Carlson continued. “They haven’t tried hard to improve your life. When the crisis came, they fled. They did nothing to defend you, or the country. They were paralyzed. Their so-called ‘principles’ turned out to be bumper stickers written 40 years ago. They had no idea what to do.”

“Going forward, we’re going to need to tell them what to do. That will work, by the way. No matter what they privately believe, politicians respond to organized groups of voters. They want to win. So they head to where the votes are.”

Carlson then outlined three things conservative voters need to demand of the Republican Party: Equality before the law, Freedom of speech, and serve the interests of the middle-class.

“Can Republican politicians change their party? Sure. We just have to make them. These aren’t evil people. They’re not working secretly for the other side. They’re empty, sad people. Politics is the way they fill the void where a rewarding personal life should be. They’re pleasers, searching for the approval of strangers. Our job is to give them clear instructions about what we want. They won’t lead. We know that now. That means we have to. When we do that, they will follow,” Carlson concluded.

This powerful monologue comes as Carlson’s show tops all cable news ratings in history in Q2 of 2020.