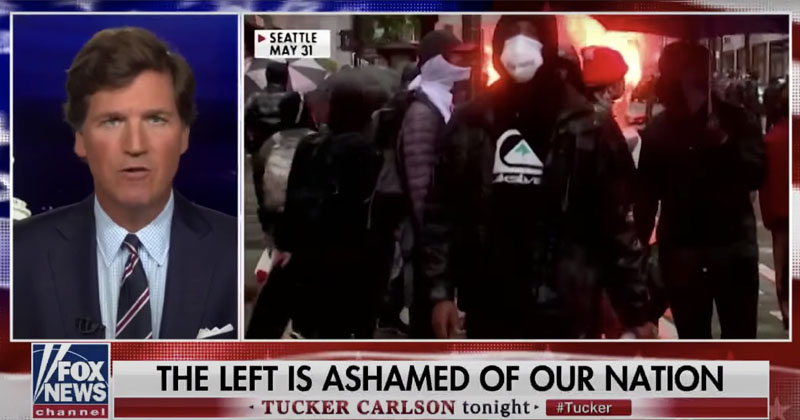 The Democrats cannot be allowed to run America because they deeply hate it, Fox News host Tucker Carlson said Monday.

In his opening monologue of “Tucker Carlson Tonight,” Carlson highlighted the left’s anger over President Trump’s Independence Day speech at Mt. Rushmore over the weekend.

“America deserves to be in flames. That is their view. And this weekend, they said it essentially out loud,” Carlson said. “Mount Rushmore, they told us, must go. It is illegitimate, just like the nation it celebrates.”

“So what to make of all of this? Well, it’s long been considered out of bounds to question a person’s patriotism. It’s a very strong charge, and we try not ever to make it.”

“But in the face of all of this, the conclusion can’t be avoided. These people actually hate America. There’s no longer a question about that,” Carlson continued.

“And yet paradoxically, at the same time, they desperately want to control America more than anything, and that leads to the most basic of all questions. Can you really lead a country that you hate?”

Carlson, whose show reached all-time high cable news television ratings, then pointed out that leaders should have a vested interest in the country they lead, but that Democrats don’t fit that “most basic prerequisite.”

“Loving the people you lead, caring deeply about them is the most basic prerequisite of leadership,” Carlson said. “The leaders of today’s Democratic Party do not, they despise this country. They have said so, they continue to.”

“That is shocking, but it is also disqualifying. We cannot let them run this nation because they hate it. Imagine what they would do to it.”

President Trump tweeted out Carlson’s monologue Tuesday morning, which has garnered over 850,000 views as of this writing.

President Trump gave America the best fireworks show the White House could muster under a tsunamai of propaganda, as Trump Derangement Goons expressed their deep hatred for our Country in the streets and on television screens.