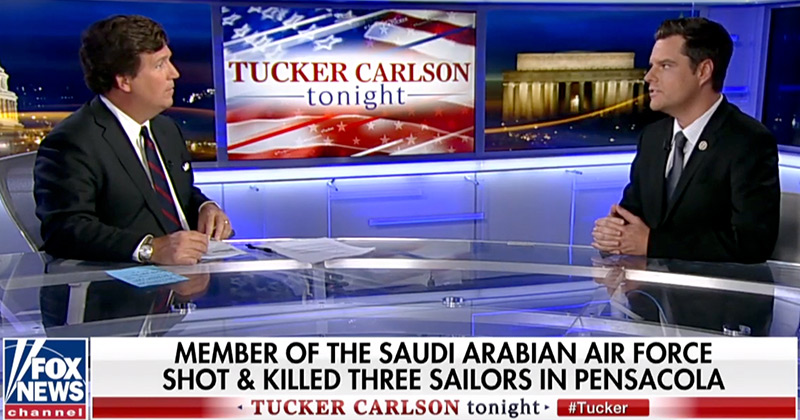 During an appearance on Fox’s Tucker Carlson Tonight, Congressman Matt Gaetz (R-FL) exposed the Saudi government’s role in supporting some of the 9/11 hijackers.

Discussing a recent terror attack by a Saudi Air Force officer at the Naval Air Station in Pensacola, Florida, which took place in Gaetz’s district, Tucker asked if it is time for America to re-evaluate its relationship with Saudi Arabia.

“The first thing we need to do is join Governor DeSantis’s call for the Kingdom to step up for the victims,” Gaetz explained. “The second thing we need to do is what Senator Graham and I will be calling for, and that is an immediate suspension of the program wherein we bring Saudis here to the United States without sufficient vetting to stop something like this.”

Continuing, the congressman wondered, “But at some point, we’ve got to look at this relationship more broadly, Tucker, and wonder, ‘How much from Saudi Arabia are we willing to take?'”

“Well, especially since we don’t even have a definitive answer about the Saudi government’s role in 9/11. I mean…” Tucker responded.

“I think it’s pretty definitive that members of the Saudi government were involved in supporting the U.S.-based activities of some of those hijackers,” he emphasized.

“I stand corrected,” Tucker conceded. “That is exactly right. I think some of the details remain hidden from us, at least from public view, by the U.S. government.”

“What’s baffling to me is how there is resilient bipartisan support for maintaining this relationship with one of the creepiest, most repressive nations on earth when we’re energy independent. Why are we doing this?” Tucker asked Gaetz.

Getting down to brass tacks, Gaetz revealed, “We need them selling oil in the U.S. dollar in order to maintain the dominance of the dollar and to be able to make our sanctions effective elsewhere in the world, especially among oil-producing nations.”

However, Gaetz noted, “That is not a reason to turn a blind eye to Saudi potential involvement in 9/11, in the shooting in Pensacola, in — look, when we look at this war in Yemen, Saudi Arabia’s engaged in all kind of terrible, atrocious activities,” adding, “And we continue to sell them arms.”

Watch a Jone Bowne report on Saudi Arabian terror below: