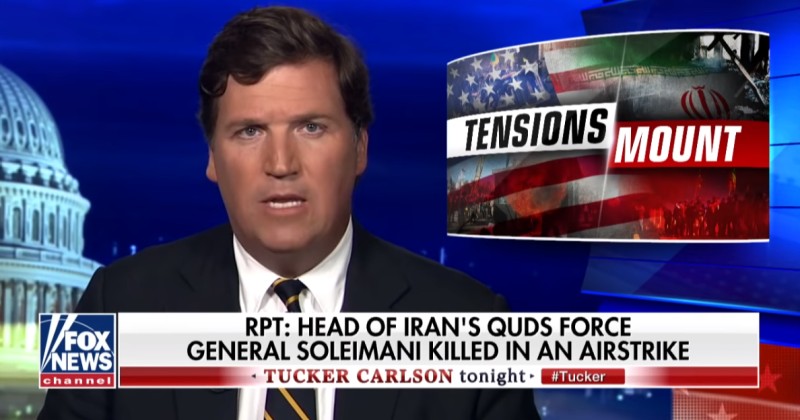 Tucker Carlson was one of few voices on the right to oppose the United States’ military escalation against Iran, warning his viewers that the neo-cons who have been pushing for it, are “liars” and “don’t care about you.”

Tensions in the region are on fire after Iran’s Quds Force General Qasem Soleimani was killed during an airstrike near Baghdad’s airport.

The attack could lead to the United States being at war with Iran as well as Iranian retaliatory attacks on U.S. soil.

Carlson warned that the country now “appears to be lumbering toward a new Middle East war,” a confrontation that “official Washington has wanted for decades.”

“Disgraced [former] National Security Advisor John Bolton has made it his life’s mission to start a war with Iran” and could be “finally getting his wish,” added the Fox News host.

Carlson then contrasted the focus on the Iranian threat to U.S. interests to the threat to the American people coming from the southern border, which is all but being ignored.

Tucker said those “demanding action against Iran” are the same people who say nothing about “the invasion of America now in progress from the South, the millions, the tens of millions of foreign nationals living among us illegally, the torrent, more significantly of Mexican narcotics that has killed and disabled entire generations of Americans.”

Carlson concluded his response with a stark warning.