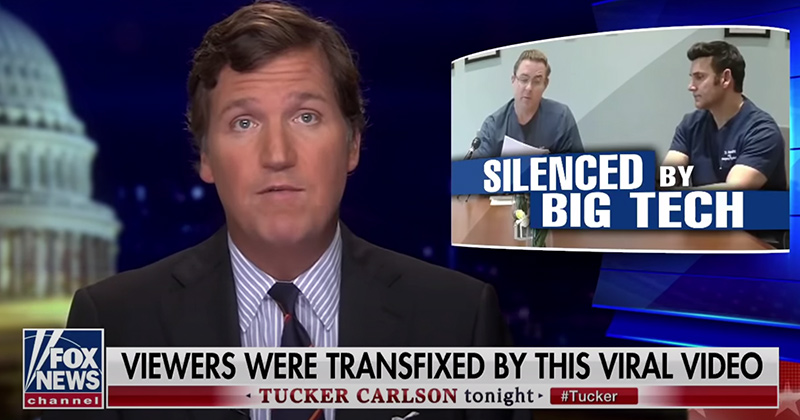 YouTube claims the video violated their guidelines, but Carlson compares the anti-free speech move to something that would happen if a doctor in China were to speak out against the state.

America is becoming more like communist China every day and it’s being done on purpose.

CARLSON: Big companies partnering with the government to spy on you without your knowledge. Americans locked in their homes, banned from going to church, placated with sedatives like beer and weed. Anyone who speaks up is silenced. Political demonstrations are illegal. Organizers are arrested. Only opinions approved by unelected leaders are allowed on information platforms. Sound familiar? It sounds a lot like China. Of all the many ironies of this moment, so many of them bitter, the hardest to swallow is this: as we fight this virus, we are becoming far more like the country that spawned it. We’re becoming more like China. It’s horrifying.

It tells you everything that our professional class enthusiastically welcomes this. Over the weekend, The Atlantic magazine published an article by two academics calling for an end to freedom of speech in America. Their model for an idea system: the totalitarian government of China. Quote: “In the debate over freedom versus control of the Internet, China was largely correct, and the U.S. was wrong.” End quote. Read the whole thing. You should. It’s the future. We could quote from it for the rest of the show. But just one more. Quote: “Significant monitoring and speech control are inevitable components of a mature and flourishing internet, and governments must play a large role in these practices to ensure that the internet is compatible with a society’s norms and values.” End quote.

Norms and values? Whose? Our leaders’ norms and values, of course. But mostly their interests. Those in power are the ones the our professional class seeks to protect, not the country. Freedom of conscience never endangers the public. It only threatens the powerful. It endangers their control. It hinders their ability to dictate election results, to loot the economy, to make policies based on whim for their own gain. No wonder our leaders have done such a poor job protecting us from China. They’re on the same team.