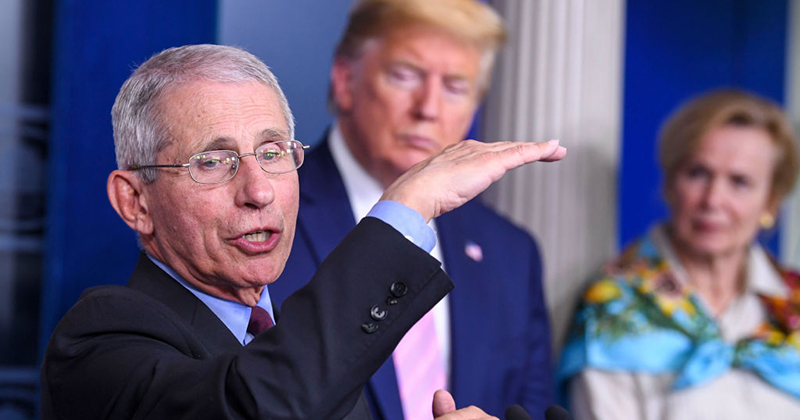 Tucker Carlson said Tuesday on Fox News that data suggests the “peak” of the coronavirus epidemic may have “passed five days ago.”

From The Daily Caller, “Tucker Carlson: Even With Epidemic ‘Receding,’ Discussing Getting Back To Normal ‘Has Become Taboo'”:

Beginning a lengthy monologue on Tuesday night’s edition of “Tucker Carlson Tonight,” the Fox News host discussed how once-dire COVID-19 projections “have been scaled back dramatically” in the wake of far lower numbers than any of the models anticipated, even taking social distancing measures into account.

“Whatever’s happening, this epidemic appears to be doing less damage than anticipated and it is receding more quickly.”

While this would ordinarily be something “we ought to celebrate,” serious talk of getting things back to normal, as has happened in some places in Europe, hasn’t even started.

“Now it’s time to look ahead,” Carlson said. “If the virus is doing less systemic damage to our system than expected, then presumably we can begin to consider how to improve the lives of the countless Americans who’ve been grievously hurt by this, by our response to this. How do we get 17 million of our most vulnerable citizens back to work? That’s the task.”

Alex Jones breaks down the recent data exposing Governor Cuomo and other leftists’ as alarmists for grossly overprojecting the deaths from covid-19.

Though deaths surged on Tuesday, they’re a lagging indicator. ICU admissions have been falling off.

The number of people hospitalized across the United States as a result of the novel coronavirus illness (COVID-19) is reportedly only a fraction of what some health experts projected a few days ago.

On Monday, New York Gov. Andrew Cuomo told reporters that in his state alone, the epicenter of the viral outbreak in the United States, new coronavirus hospitalizations dropped by about 75 percent, from 1,427 four days ago to 358 on Sunday.

Highlighting the drop in new hospitalizations in NY, the state hardest hit (131,239 cases; 4,758 deaths as of Monday) by the coronavirus, Alex Berenson, former New York Times reporter who has been following the U.S. outbreak closely, observed on Twitter on Monday: “It’s over, guys. It’s already over.”

Jim Malatras, an aide for Gov. Cuomo, reportedly indicated that projections are now showing that New York is unlikely to need 110,000 hospital beds, as previously thought.

The new forecasts show “a much lower demand” that stands in the estimated 20,000-30,000 range, Jesse McKinley, the New York Times bureau chief in the NY capital of Albany, wrote on Twitter on Monday.

CDC Director Dr. Robert Redfield said Monday the death toll will likely be “much, much, much lower” than predicted.

DR. ROBERT REDFIELD: I think it’s really important. First, models are only as good as their assumptions. Obviously, there was a lot unknown about this virus. The ability to actively make a lot of assumptions was much wider than if this was an Influenza B outbreak. Second thing, I will say from a public health perspective, to me, the real value of models is to have a model and then try to understand — if I invest resources here, what does that do to the model? If I invest in intervention strategies here, what does that do to the model? It’s a way of beta testing how you’re going to respond and what it does to the different models. And models should never be used to assume that we have a number. You saw those numbers are quite staggering. You’ve got 200,000 to 2 million Americans are losing their lives before the fall. That’s a pretty staggering number.

HOST: Are throwing those kind of numbers out actually helpful because what they do is scare the hell out of everyone to social distance? Is that the purpose?

DR. REDFIELD: I think different people may look at it in different ways in terms of transparency. CDC had models early on. We didn’t really publicize the models. We used them internally to understand deviation strategies. I think part of the importance of getting the American public’s attention that these models did, we really need the American public to be fully engaged now with great rigor and vigilance on the social distancing. As you pointed out, those models that were done, they assume only about 50 percent of the American public would pay attention to the recommendations. In fact, what we’re seeing is a large majority of the American public are taking the social distancing recommendations to heart. And I think that’s the direct consequence of why you’re seeing the numbers are going to be much, much, much lower than would have been predicted by the models.

Note the lack of pushback when asked if the numbers were just to scare people.

I don’t fault them for it, it worked at keeping people from gathering in large numbers but it’s time to start moving towards getting back to normal lest the “cure” become worse than the disease.

And now the other charts. First, the spline method for new daily cases:
• New confirmed US cases may have peaked, same for UK. Does this mean outbreaks have peaked? Time will tell
• Austria cases trending down; they plan to start easing lockdown next week pic.twitter.com/zZ0y0EI29c

As Tucker noted, anywhere from ten to twenty million Americans have already lost their jobs which could lead to many deaths in itself.

The blanket bans on so-called “non-essential” workplaces were way too extreme.

Such measures would have made sense back in January but our authorities let the virus in through our airports and encouraged its spread in the name of fighting racism.

In powerful show of defiance of #coronavirus scare, huge crowds gathering in NYC's Chinatown for ceremony ahead of annual #LunarNewYear parade. Chants of "be strong Wuhan!"

If you are staying away, you are missing out! pic.twitter.com/NGBUAfHWpl

It has spread like wildfire but the death rate seems to be .03% or less rather than 3.4% as the World Health Organization ridiculously claimed.

1/ As you sit home watching #COVID death counts spiral, please know the official @CDCgov guidance for coding COVID-related deaths is as follows: any death where the disease “caused or is *assumed* to have caused or *contributed to* death.” Confirmed lab tests are not required… pic.twitter.com/H4D6mcti3R

Dr. Birx says that anyone who dies with coronavirus, regardless of any underlying health condition, is being counted as a death from coronavirus.

2/ One would think the fact all three West Coast states have decided they don't need more of the most crucial piece of equipment in treating serious #CV cases would lead reporters to ask hard questions about the projected course of the epidemic – and lockdowns. One would think.

Did we put down a deposit or something? Can we call Visa about this?

Fortunately, Trump doesn’t seem interested in listening to the “experts” advice for much longer and appears to agree with Tucker that it’s time to restart the economy.