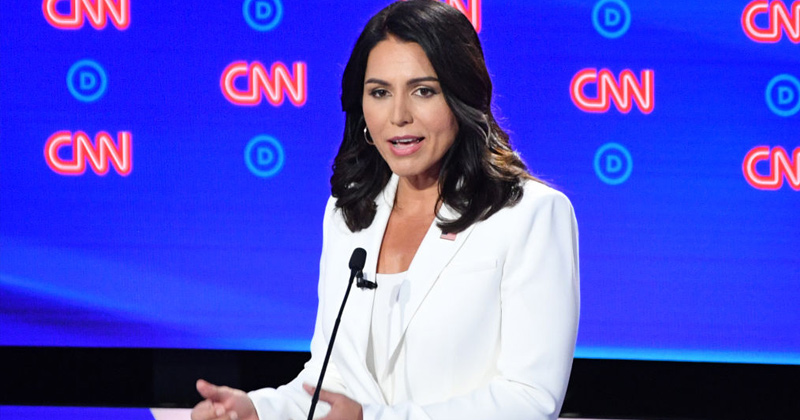 Rep. Tulsi Gabbard (D-HI) slammed Sen. Kamala Harris (D-CA) for her record as a California attorney general and her hypocrisy over marijuana in one of the congresswoman’s strongest moments on the Democrat debate stage on Wednesday.

“Senator Harris says she’s proud of her record as a prosecutor, and that she’ll be a prosecutor president, but I’m deeply concerned about this record,” Gabbard began.

“There are too many examples to cite, but she put over 1,500 people in jail for marijuana violations and laughed about it when she was asked if she ever smoked marijuana,” she continued.

Harris famously said during an interview with the The Breakfast Club radio show that she smoked marijuana while she was in college while listening to Snoop Dogg and Tupac.

Harris has faced lingering questions on her tough stances as a federal prosecutor.

Marianne Williamson used her time on the debate stage to attack Trump for failed Democrat infrastructure, and the ignorant crowd cheered.

“She blocked evidence that would have freed an innocent man from death row until the courts forced her to do so,” Gabbard continued. “She kept people in prison beyond their sentences to use them as cheap labor for the state of California and she fought to keep the cash-bail system in place.”

“That impacts people in the worst kind of way,” she added.