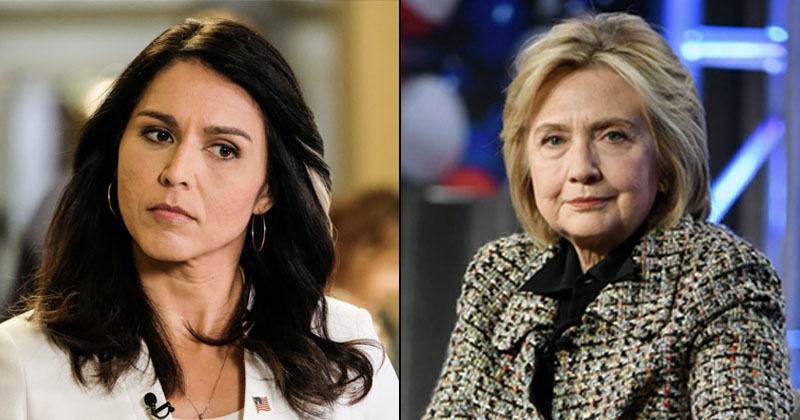 2020 Democrat presidential candidate Tulsi Gabbard filed a defamation lawsuit against Hillary Clinton, who accused Gabbard of being a Russian asset.

The lawsuit, filed on Wednesday at the U.S. District Court for the Southern District of New York, claims Clinton “deliberately and maliciously” made false statements against Gabbard in an effort to “derail” her presidential campaign.

“Gabbard, a U.S. Representative for Hawaii’s 2nd congressional district, asserts in her complaint that Clinton deliberately and maliciously made false statements in an attempt to derail Rep. Gabbard’s campaign, by alleging that Gabbard is a ‘Russian asset.'”

The lawsuit outlines Gabbard’s patriotic background in the military and as a Hawaii congresswoman, and explains she “has suffered significant actual damages, personally and professionally, that are estimated to exceed $50 million—and continue to this day.”

“Tulsi is not a Russian asset. No one—Russia or anyone else—controls her or her presidential campaign,” the lawsuit says. “Instead, Tulsi is a loyal American servant, declaring her allegiance to the United States of America both as a soldier and as a member of Congress. She has been serving for over sixteen years in the United States Army National Guard and has voluntarily deployed twice to war zones in the Middle East.”

The lawsuit also points out that Clinton’s remarks had no basis in fact or reality — it was simply a demonization effort to hurt Gabbard’s campaign.

“Clinton had no basis for making her false assertions about Tulsi – and indeed, there is no factual basis for Clinton’s conspiracy theory,” the lawsuit states. “Clinton’s peddling of this theory has harmed Tulsi, has harmed American voters, and has harmed American democracy. Tulsi brings this lawsuit to ensure that the truth prevails and to ensure this country’s political elites are held accountable for intentionally trying to distort the truth in the midst of a critical Presidential election.”

Tulsi Gabbard took on the fake news sponsors of the debate, CNN & NYT, and other candidates over endless wars & regime change.