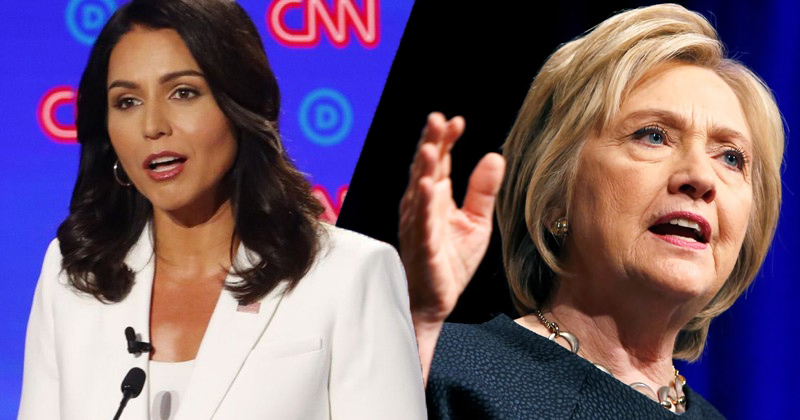 “Hillary & her gang of rich, powerful elite are going after me to send a msg to YOU: ‘Shut up, toe the line, or be destroyed.’ But we, the people, will NOT be silenced,” Gabbard wrote in her tweet.

Hillary & her gang of rich, powerful elite are going after me to send a msg to YOU: “Shut up, toe the line, or be destroyed.” But we, the people, will NOT be silenced. Join me in taking our Democratic Party back & leading a govt of, by & for the people! https://t.co/TOcAOPrxye pic.twitter.com/TahfE2XOek

In the video, she says she was warned Clinton and her powerful allies would come after her and destroy her politically.

“People warned me in 2016 that my endorsement of Bernie Sanders would be the end of my ‘political career,'” Gabbard says.

“They said ‘Clinton would never forget that she and her rich and powerful friends, her allies in politics and in the media will make sure you are destroyed.’”

“Well there have been countless hit pieces full of smears against me from day one of this campaign.”

“They’ve tried to destroy my reputation and my lifetime of service because I stood up to them.”

After going over her military background, Tulsi pointed out she stands above other Democrats in one regard: “I’m not afraid to openly express my love for our country.”

“But if they can falsely portray me as a traitor, then they can do it to anyone,” Gabbard warns.

“And in fact, that’s exactly the message that they want to get across to you, that if you stand up against Hillary and the party power brokers, if you stand up to the rich and powerful elite and the war machine, they will destroy you and discredit your message.”

Gabbard last Friday responded to Clinton’s allegations that she’s a “Russian asset” by calling on her to join the race and challenge her head on.

… concerted campaign to destroy my reputation. We wondered who was behind it and why. Now we know — it was always you, through your proxies and …

… powerful allies in the corporate media and war machine, afraid of the threat I pose.

It’s now clear that this primary is between you and me. Don’t cowardly hide behind your proxies. Join the race directly.