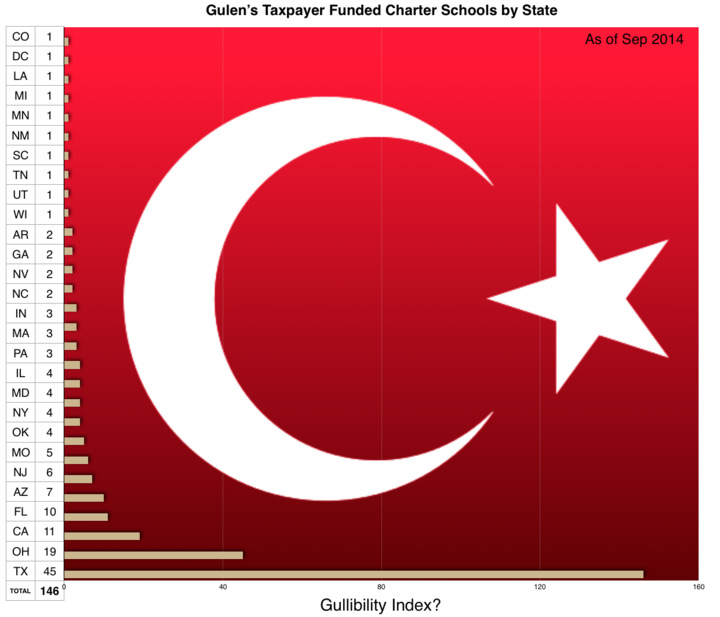 The Turkish government has filed a lawsuit in Pennsylvania against the powerful Turkish Islamic cleric, Fethullah Gulen, living in exile in the Poconos.

The lawsuit alleges that Gulen “issued orders from within this jurisdiction [Pennsylvania] directing his well-placed religious followers residing in Turkey to launch a targeted campaign of persecution” using a “network of loyal state officials – police, prosecutors, and judges – in Turkey willing to do his bidding”. It further alleges that Gulen and “his co-conspirators in Turkey illegally planted evidence, fabricated search warrants, secured illegal wiretaps, and ultimately arrested Plaintiffs without any legal basis, unlawfully detaining them for periods of up to 20 months”.

Robert Amsterdam, founding partner of the firm filing the complaint, said the goal of the lawsuit was “to expose allegedly unlawful conduct by the Gulen network worldwide”. “We’re going to look into their activities throughout the United States, Africa and other regions where the network is active”, he said.

The lawsuit states in its introduction that “Mr. Gulen has an international following estimated to approach 10 million people. He has developed a vast network of businesses and non- governmental organizations that supply him with financial support, and he is estimated to control at least $25 billion in assets.”

While the Gulen network’s influence in Turkey is allegedly based on infiltration of police and judiciary, in the rest of the world its influence is felt in schools. Estimates are that there are 300 Gulen schools in Turkey and 1,000 worldwide. In the United States there were 146 Gulen taxpayer funded charter schools as of Sep 2014.

The lawsuit states that “Mr. Gulen controls dozens of business entities and more than 120 charter schools in various states, many of which are or have been under investigation by state and federal criminal and regulatory authorities.” Some of the Gulen schools have been investigated and closed but new ones continue to open. The heaviest concentration of Gulen charter schools is in Texas where there were 45 in 2014. A new Gulen school just opened in Austin, Tx last month.

Documentary filmmaker Mark Hall is nearing completion of a film, “Killing Ed”, that looks at problems with the charter school movement. The film focuses on the Gulen schools as a worst case example of charter schools. In our interview with Mark Hall, embedded below, he pointed out that the Gulen network is “educating roughly a little over 60,000 students across United States now and they’re bringing in many thousands of teachers, who are followers of Fethullah Gulen, on H1-B visas to teach at the schools.”

Gulen charter schools in the US are completely funded by taxes which Mark Hall estimates “excess of $500 million a year”. “These are funds that you and I are giving to our government and they’re going directly to this organization”, he said. So while in Islamic countries the Gulen schools are Islamic madrassas, Gulen schools in the US have to carefully avoid any overt religious proselytizing to Islam. But as Hall pointed out, “what you see in the schools here in United States and elsewhere is intense national Turkification of their children.” “These are not Turkish kids, these are kids that have a variety of backgrounds — Hispanics, Asians, African-Americans — and you know the question is why are they being so intensely taught a lot about Turkey”.

That is not how the school is portrayed to parents. They are marketed as schools of Science and Math.

They stage large Science Fairs, which whistleblowers allege are merely dog and pony shows for politicians. Whistleblower teachers and students allege in the documentary film that the science projects are largely prepared by staff, not students andthat many teachers brought from Turkey are not qualified teachers, certainly not in science or math

Paul L. Williams, journalist, author and terrorist consultant to the FBI, has called Fethullah Gulen “the world’s most dangerous Islamist”. Is it because Gulen is not engaging in terrorism but using schools to proselytize our children for Islam? Bill Ayers became far more dangerous and effective when he stopped blowing up buildings and focused on deconstructing society through education.